Liquid Oxygen - that’s the state of the market

The market seems to resemble a rocking horse, which is moving but making no progress. In fact the state of the stock markets can be best described in the words of yesteryear’s Bollywood villain Ajit, known for his one-liners.

The market seems to resemble a rocking horse, which is moving but making no progress. In fact the state of the stock markets can be best described in the words of yesteryear’s Bollywood villain Ajit, known for his one-liners. The punishment he prescribed for one of his enemies was  - “…Robert, isko liquid oxygen may daal do! Liquid issay jeenay naïf degaa, oxygen issay marnay nahi degaa! (Robert, put him in liquid oxygen. The liquid won't let him survive, the oxygen won't let him die.)


The Indian stock markets too appear to have reached a state of ‘liquid oxygen.’ The main indices are neither displaying confidence on their way up nor showing signs of panic on their way down. No wonder market commentators, for lack of other reason are found constantly and conveniently shuffling words like risk appetite and risk aversion and consolidation at regular intervals.


Take the case of the last three months; the BSE Sensex is down a little over a per cent while for the last six months, the benchmark index has been flat. All this when FIIs have poured in Rs307bn YTD. After being record sellers of Rs529.9bn in Indian shares in 2008, FII inflows from overseas reached a record Rs834.2bn in 2009. This exceeded the high set two years ago in local currency terms. The Sensex gained 81% in 2009, its best since 1991. 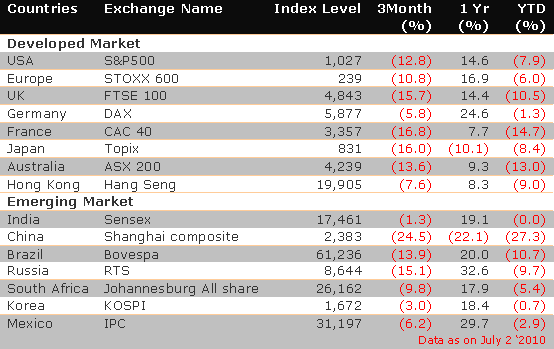 The bulls and bears seem to be equally tired but let’s look at both the sides. The bull case for India is simple; the Indian economy in real terms is doing extremely well. I think Indian corporates have come out of the shock events of 2008 much stronger, barring a few sectors like real estate. The confidence is back and Indian companies have done what they need to with their business models and strategies. On the technical front, outstanding positions (odiya in market parlance) is a pittance compared to heady days of January 2008. This points that correction will not get the usual snow balling effect due to margin calls.

The bear case on the other hand is that in spite of India being on a strong wicket, external events can pull the trigger and cause short term correction. Secondly, the retail participation has still not taken off as it ought to have. The retail investor and potential market entrants remain skeptic. That explains why the whole rally of 2009 has taken most people by surprise. The market went up with majority people neither physically nor mentally participating in it. The current situation is precariously poised as any negative news can throw a spoke in the wheels of an already tired market.

Plenty of bad news continue to pour from US, Europe, China and elsewhere. To add further misery we have an oil spill of BP which has left its stains on the markets too. Sometimes you hear some troubling news from North Korea, a country now described as having too many weapons but not enough food. Concerns of China’s tightening measures and the never-ending sovereign debt crises in the euro-zone will continue to cast an ugly shadow on markets worldwide, including ours.

So the scene around the globe is not so good but India is shining like a beacon. It is like a shining sun crowded by threatening clouds. Some see a silver lining. Others find a rainbow. For now, it is very difficult to conclude whether the rainbow will lead us to a pot of gold.