Nifty ended a volatile week and closed at 5262 down 11 points for the day and after facing an extremely volatile week.

The Goldman Sachs enquiry news broke after close and the SGX fell to levels of 5170 closing around 5175-this however was prior to us DOW recovering mildly so SGX can open around 5225-the decision is whether one should buy or should one hold out for a further correction?

Technically 5170 is a strong support zone.


We have had four straight sessions of downward correction-good chances that a gap down will be bought into for at the minimum a technical bounce.


If markets open weak rupee will weaken which will in turn be positive for technology stocks which can lend support to the markets.


5290 which is the 20dma moving average will now prove to be a significant resistance.


How Dow and world markets digest the news on Monday will also impact-Asia should open weak, so opening cues r weak .however on Monday if Dow shrugs itself off this and remains flattish we would have merely used this news as a trigger for a technical level testing after 11 straight weeks of uptrend.


Many large caps close to good supports and how they tackle this supports will be of upmost importance-Reliance broke 1100 but close to 1078 ss exists, less than a percent away from Fridays close, Larsen has support at 1550 levels, ICICI around 915,Maruti around 1350,Sterlite around 820.


Main and most important we are in the midst of result season-internal cues can prove to be far more important.


The strategy is twofold-either pick up strong stocks which have moved up continuously and sharply and for which one is waiting for a dip-like Tata Motors, Piramal Healthcare, Tata Steel, HDFC Bank, Indian Hotel, JSPL ,Patni, Zee or one should pick up oversold stocks close to supports for trading-ICICI, Maruti, Larsen, BEHL, PNB, BOB, Mcdowells and Dr Reddy.


On the flip side one can short Praj, IVRCL and HDIL.


In sum lets target the top and bottom and give the mid some time to decide their direction.

Weekly charts are still positive whereas on a daily chart check MACD is negative.rsi continues to be in positive zone as of Fridays close. Stochastics being oversold is of milder significance-since it’s a dicey week will probably give and EOD summary as well. 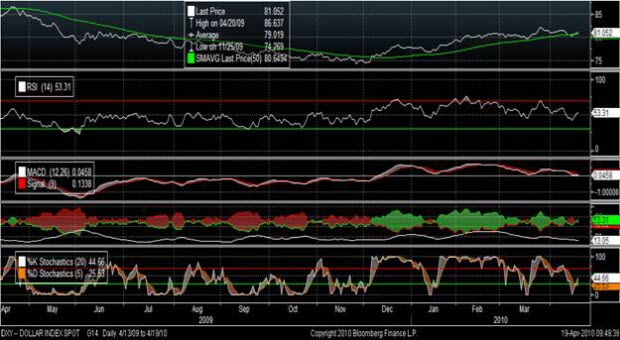