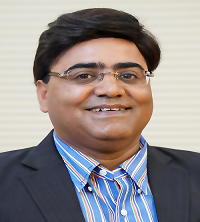 Nilesh Panpaliya, CFO, Solar Industries India Limited is currently employed as CFO of Solar Industries India Limited. He has been with the company for over 11 years. His educational qualification includes BE Electronics and MMS in Finance. He has an overall experience of 20 years in the field of Finance.  He has previously dealt with industrial Finance, merchant banking and management consultancy services.

Solar Industries India Limited was founded in 1995 by its founder Chairman Shri Satyanarayan Nandlal Nuwal to produce cartridge explosives. It has grown to become India's largest manufacturer of Industrial explosives and Explosive initiating systems and spreading its presence to Global Markets. The company offers high-quality products and services that are backed by stringent safety standards, a robust infrastructure, and a proven quality management system. Solar's manufacturing facilities span 17 locations across India along with 3 manufacturing units outside India.

We are exporting to more than 24 countries with consumers across 42 countries.

We have achieved peer position as a renowned manufacturer and exporter of industrial explosives and accessories in the industry. Our name is being synonymous with quality and innovation. Due to our broad and extensive product portfolio, overseas manufacturing operations and exports, we are competing head to head with the largest explosives manufacturers worldwide.


What is your current market share as compared to your competitors?

We are the market leaders with 23% share in the domestic market and a 55% share in exports of industrial explosives and initiating systems.

What expansion plans have you undertaken in recent times and what are your growth plans for the FY17-FY19 period?

(i) Increasing the capacity of Packaged Explosives and accessories substantially to meet the growing demand.

(iii) We have set up our fourth overseas plant in South Africa which would start contributing to revenues from 2017-18.

(iv) We are the first company in the private sector to set up a plant for the manufacture of HMX required for Defense. We also have facilities for manufacturing of propellants, pyros and igniters required for our missile systems. We aim to supplement India’s indigenous defense manufacturing and to support the nation’s efforts in building ammunition war reserves under the “Make in India” initiative.

Can you highlight a few notable milestones since the genesis of Solar Industries India till date?


Please provide a breakup of business in terms of domestic and international?

70% of our business comes domestic sector and balance 30% from the international sector.

What is your projection on revenue growth for the next 3 fiscals?

We foresee a growth of 20% each year for the next 3 years.

What are the unique initiatives and policies implemented by the government that provide an added impetus to Solar Industries India's growth plans?

The government has accorded the highest priority to “Make in India” for boosting the economy and creating employment to its young population. Moreover, India is heavily dependent on imports to meet the defense acquisition requirements. About 70 per cent of the capital acquisitions for equipping armed forces are met through imports. Therefore, one of the focused areas for “Make in India” is defense industry that provides support to the national security in addition to creating employment. Thus “Make in India” programme in defense sector is extremely relevant with the twin objectives of creating employment and bolstering defense preparedness to strengthen national security.

DPP focusses on institutionalizing, streamlining, and simplifying defense procurement procedure to give a boost to ‘Make in India’ initiative of the Government of India, by promoting indigenous design, development, and manufacturing of defense equipment, platforms, systems and sub-systems. ‘Make’ procedure has also been refined to ensure increased participation of the Indian industry. Enhancing the role of MSMEs in defense sector is one of the defining features of DPP. Cutting down permissible timeframes for various procurement activities, and institutionalizing robust mechanisms to monitor for probity at various stages of the procurement process, are the cornerstones of DPP.

What are your expectations on GST and how will it be beneficial to Solar Industries India?

Advantages of GST
1. The compliance cost will come down considerably as most indirect taxes will be replaced by GST.

2. Evasion of tax will drop considerably as input credit would encourage tax compliance.

3. Checks at State borders will be eliminated which slows down movement of goods and result in increased turnaround time of vehicles.

4. Interstate sales - all subject to litigation as in commodities like explosives we are moving goods to warehouses near consuming points and deliveries from there attract the relevant state sales tax whereas the originating state demands payment of Central sales tax causing endless litigation and increases the cost of goods to end users.

5. Manufacturers like us will stand to advantage as we become more competitive as GST would address cascading of interstate sales tax etc.

The company since inception have been focused on growing with the economic growth and development of the core industry in India.  Keeping pace with the growth in the coal sector the company has set up 23 Bulk plants in proximity to major coal mining areas to meet their day-to-day requirement of explosives and as a result of today the company plants spread over various mining areas in the Country and is poised to increase our locational advantage as new mines and expansion of mines are slated to achieve the ambitious target of 1.5 Million Tons of Coal by the Coal Ministry.

The spurt in demand of infrastructure development with the Govt. of India’s avowed plan of providing housing for all by 2022 and planned to construct 2.95 cr. houses for weaker sections which should spurt the demand for Cement, Steel and aggregate.  Further, the Road Ministry have ambitious plan of achieving road construction of 50 KMs a day with four Laning of major Highways, providing connectivity to ports and development of airports, we see a substantial increase in demand of packaged explosives and hence we have increased our capacity at our packaged explosives plant and have the largest capacity available at a single location in the World.

The company is also seized of all environmental impact which blasting operations would create, hence have invested substantially in developing newer initiating system like Non-electric delay detonators and Electronic detonators to mitigate environmental damage.

With our successful operations of overseas plants in Zambia, Nigeria, and Turkey, we have now set up a Unit in South Africa and the coming years would increase our overseas footprints in other economies as well.

Our aim is to supplement India’s indigenous defense manufacturing and to support the nation’s efforts in building ammunition war reserves under the “Make in India” initiative.

With our vast experience in handling explosive substance and energetic materials, we have created notable infrastructure and facilities to manufacture critical high energy materials, propellants and pyro devices required by the defense and para-military forces.

We have set up India’s first state-of-the-art technology based plant to manufacture high energy materials such as HMX and HMX-based compositions. This will be an import substitute for meeting regular and surged requirements of Ordnance Factories, Defense PSUs and DRDO. With the creation of facilities for filling of Rockets, War Heads, Air Bombs, Mines, Torpedoes, among others, we are in a position to undertake production of a large variety of Ammunitions. We have also signed an MOU with the Government of Maharashtra to install world-class facilities to produce Bi- Modular Charge Systems (BMCS) – a vital artillery equipment that propels shells to distances of over 40 kms, fully integrated rockets and the new generation of hand grenades.