x
Home » Top News » Can all pharma stocks strike it rich over a depreciating rupee? 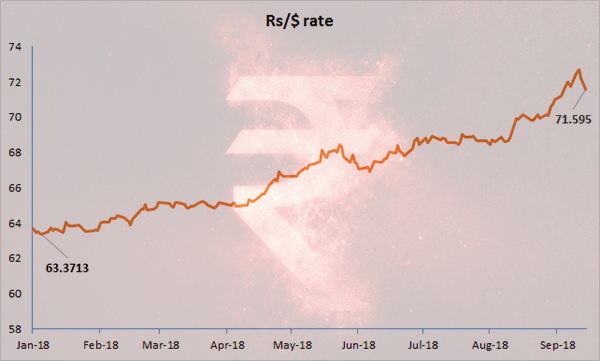 Can all pharma stocks strike it rich over a depreciating rupee?

As India grapples with the double whammy of escalating crude oil prices and tumbling rupee, there’s a silver lining for investors in the form of sectors that could actually benefit from the weakening currency.

The rupee has seen a steady decline of ~13% against the dollar so far in 2018. Why has the currency been falling against the greenback? Several factors can be attributed to the downfall viz. the strengthening dollar due to US Fed rate hikes, the expectation of more hikes in the future as inflation figures improve in the US, the Turkish lira affecting other emerging market currencies via the contagion effect, rising crude oil prices resulting in a bigger import bill, and hence, the widening current account deficit.

As India grapples with the double whammy of escalating crude oil prices and tumbling rupee, there’s a silver lining for investors to turn their head to sectors that could actually benefit from the weakening currency.

How do companies benefit from a weakening currency?

The connection is simple—from an export perspective, if a company in India sells a service/product abroad in USD, for every $, one would gain less, say Rs65 earlier, when we had a lower exchange rate. Now, the same $1 will enable one to pocket Rs72-73, denoting a gain of Rs7/8 over the previous exchange rate.

Sectors that stand to gain are those that earn their majority revenue in USD. These include export-oriented sectors such as pharma and IT among other beneficiaries.

Will all pharma companies benefit?

To say that all pharma firms will benefit from the depreciating currency would be a fallacy. As with everything economy-related, a combination of factors must be considered to understand the net effect of a variable (in this case, the falling rupee) on the performance of pharma firms.

Hedging policy: Those with a favorable hedging policy will be able to take advantage of the ongoing depreciation. Here, companies that hedge against forex volatility too much will not benefit from the downfall.

USD-denominated debt: Highly leveraged companies with dollar-denominated debt will need to repay a greater amount in rupees than earlier when the rupee was stronger, thereby increasing finance costs and offsetting any forex gains.

Thus, gross profits or EBDITA margins of pharma companies will be lifted depending on the net effect of external debt, level of hedging, and proportion of dollar revenue. Of course, where the rupee goes from here will be the prime deciding factor.

As per a securities firm, other things being equal, a 1% depreciation in the rupee could boost EBIDTA margins by 30bps and push EPS forward by 1.7%.

Which pharma companies are most likely to benefit?

Divis Lab is expected to be a major beneficiary with US exports accounting for a significant proportion of its sales; the company does not hedge against currency volatility, which will further bump-up its profitability.

This is likely to be followed by limited benefits to Sun Pharma, Dr. Reddy’s, Lupin, and Cadila owing to a relatively less proportion of export sales in USD.

On the other hand, the declining currency will be a headwind for multinational pharma companies owing to expensive imports.

The BSE Healthcare index has returned ~6% so far in 2018 and is likely to perform well on condition that the net effect of rupee depreciation favors individual pharma companies, among other factors driving the industry.

As Indian pharma firms recover leaving the worst behind them with respect to regulatory compliance, more cheer may follow as companies’ US base business stabilizes. However, mergers and acquisitions are likely to be deferred owing to greater investment costs in the backdrop of a falling rupee.