Read Full Story
Talk of post election rallies and our minds go back to 1991 when Mr. Narasimha Rao managed a minority coalition. Markets were sceptical about how a shaky government would handle the economy after the forex crisis. However, the markets were in for a pleasant surprise. Mr. Rao and Dr. Singh unleashed economic reforms with a vengeance. Tariffs and quotas were dismantled; the license Raj was abandoned and the doors were thrown open to foreign investments. Over the next 6 months, the markets were up by nearly 200% before the Harshad Mehta scam came as a rude shock. If you worry about impact of elections on stock markets, the chart below should be quite revealing. 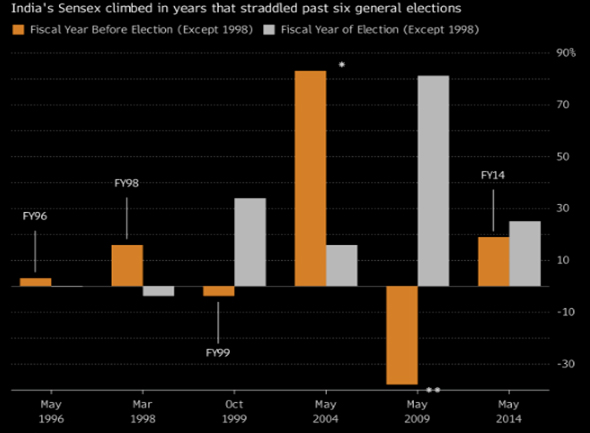 As can be seen from the above chart, the markets have either corrected marginally or performed extremely well in the one year preceding and following the elections. The only exception was 2009 elections but that had less to do with elections and more to do with the Lehman crisis and the global financial meltdown. But, why do elections matter in the first place?

A change in government could signal disruption in the reforms process. For example, when the NDA lost power in 2004, against all expectations, the Nifty touched the lower circuit  on results day but came back to set the stage for a massive bull rally lasting for the next four years.

Stock markets prefer reforms followed by stability. The 2004 UPA government managed to usher in the much needed reforms despite being supported by the Left Front. That explains why the markets gave an upper circuit thumbs-up to the UPA when it returned in 2009.

The government decides the finance minister and it is he who presents the Budget. Markets really look forward to the budget for broad reforms signals in terms of capital market reforms, tariff reforms, industrial policy, foreign investments etc. All these are extremely price sensitive announcements.

Markets are more worried about announcements that have negative implications for equities. For example, the Minimum Alternate Tax (MAT) in 1997, introduction of STT in 2004, GAAR in 2012 and tax on long term capital gains in 2018 had negative repercussions for the markets.

What should be your strategy ahead of the 2019 elections?
Election strategy should be predicated on 3 approaches. First, look at non-cyclical stories that are likely to play out, notwithstanding, which government comes to power. Secondly, the focus will be on specific stories that will be predicated on the election outcome. Lastly, we will also take a financial planning approach as to how to handle their financial plan considering that 2019 is an election year.

Approach to non-cyclical equity stories around elections
The first step is to identify some high priority sectors that are unlikely to be really impacted by the outcome of the elections in 2019. The first story is consumption. With rising incomes, falling oil prices and better investment returns in the last five years, consumption could be the big theme. Within that subset, the rural consumption theme is likely to continue irrespective of which government that comes in 2019. The government has set a steep benchmark of doubling farm incomes by 2022 and 150% MSP for Kharif and Rabi crops. This is unlikely to be diluted, irrespective of who comes to power. So consumption will be attractive and rural will be promising but a convergence of the two could be the big story. Secondly, infrastructure investment is another area that will not see any dilution. With close to $200 billion of infrastructure investments required each year, there is no going back. That will mean big orders for road, bridges, highways etc. Most infra companies are getting their house in order. Lastly, don’t miss the export driven sectors like IT and pharma. With over 80% of their revenues and profits coming from abroad, they are likely to be immune.

Approaches to sectors that could be vulnerable to government policy
PSU banking could be policy dependent. The current government has gone out of its way to help PSU banks get out of the mess with the help of the NCLT as well as by recapitalizing them. How the new government will treat this subject remains to be seen. Secondly, downstream oil companies will predicate on how the leeway in setting oil prices is managed. This government has largely stayed hands-off. Any decision to impose subsidy on these OMCs would be negative. Lastly, the way disinvestments is done and tariffs are managed may need a relook. As an investor, one should wait for greater clarity on these sectors as they are quite vulnerable to shifts in policy.

Approach to your long term financial plan
The good news is that macro policy setting has been largely institutionalized. Hence, one need not worry about knee jerk reactions on inflation, interest rates, fiscal deficit management, currency management, etc. That means, if you are talking about your long term goals over the next 20-25 years then your primary concern should be the India story and not so much about the nature of government formation. That could be the good news!