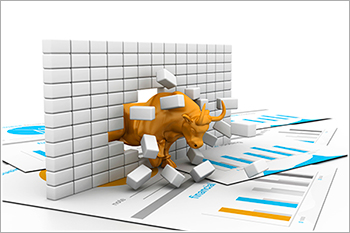 In the last few days, the Sensex has decisively and comprehensively broken above the 40,000 mark. It was only the Nifty which was waiting to breach the 12,000 mark.

For a better part of the year, the two psychological levels were 12,000 for the Nifty and 40,000 for the Sensex. Not that these levels were not breached. In fact, if you look on an intraday basis, these levels were breached thrice this year. Both the Nifty and the Sensex breached their respective psychological barriers first on the day of the election results. The feat was again repeated on the Union Budget but post the disappointments in the budget, the markets trended lower.

In the last few days, the Sensex has decisively and comprehensively broken above the 40,000 mark. It was only the Nifty which was waiting to breach the 12,000 mark. On November 06, 2019, the Nifty breach of the 12,000 level happened for the third time this year. The question is whether it will be sustainable?

We have presented the Nifty and the Sensex (daily highs) on a dual scale on an YTD basis. The 40,000 level of the Sensex has been made to correspond with the 12,000 of the Nifty on the dual scale so as to give a clear picture of the breach of these levels. As can be seen in the chart above, there have been three occasions. In May, the indices did cross these levels but retreated on profit booking. On the budget day, once again, these levels were touched but then the markets fell due to certain announcements like the public shareholding hike, buyback tax and the FPI surcharge.

In the post September 2019 phase, when the Nifty and Sensex bottomed out, there have been two key triggers that took the markets to new highs. Firstly, on September 20, 2019, the big corporate tax cut made a lasting difference to the market sentiments resulting in a 2,100 point rally on the Sensex. The month of October has seen a secular uptrend in the indices on the back of sustained FPI buying. As we stand now, the Sensex has decisively settled above the 40,000 mark and it should be a matter of time before the Nifty follows suit. Here is why.

Why Nifty could decisively breach 12,000 now?
It is said that in the markets the toughest job is to predict index levels. To get these levels consistently right, you have to either be god or a liar. However, at times plain logic also works and here is the logic for the Nifty to sustain above 12,000.
Nifty at 12,000 is certainly a milestone with a generous dose of help from a reforms push by the finance minister. For the next milestone on the Nifty and the Sensex, corporate India needs to start growing; on the top-line and the bottom-line!