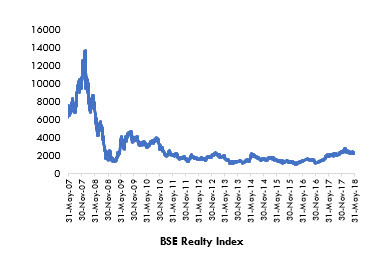 To the considerable relief of all stakeholders, India's struggling realty sector is now stabilizing to some extent. As a result, real estate IPOs are also gaining momentum.

A decade ago (2007-08), ahead of the global financial crisis which hit markets around the world, including D-street, the Indian initial public offering (IPO) market delivered a stellar show with overall Rs41,300cr funds raised, making India the fifth-largest market in volume and seventh-largest in value terms. However, after the global economic slowdown in 2008, the capital markets crashed and the numbers fell to a low of Rs2,030cr. The consecutive years also saw a limited number of IPOs being filed.

Nonetheless, as of 2017-18, a resurrection in the Indian IPO market has been witnessed. As many as 45 companies have resorted to raising much-needed capital via the IPO route. A record of aboutRs82,100cr has been collectively raised by these companies -- a whopping three-fold jump from previous years’ Rs28,200cr and almost double the 2007’s IPO figure.

Prior to the global financial apocalypse that shook the world, including India, the real estate sector was at its peak. Till then, the wave of financial liberalization allowed banks to give credit to large-scale borrowers – resulting in a sharp rise in foreign capital inflows and domestic liquidity.

Post-2013, the story changed and the previous roar of the Indian real estate sector first sank to a murmur before falling silent. The liquidity crunch, coupled with high inflation and execution delays, compelled housing buyers to postpone their purchase decisions. This naturally impacted housing sales and property prices, leaving developers with huge piles of unsold inventory.

Battling massive negative cash flows, many developers also failed to deliver their promised projects. Things worsened when high-risk provisioning was assigned to the real estate sector as various realty firms either defaulted or faced bankruptcy. Banks became reluctant to lend to developers as they were already burdened with non-performing assets (NPAs) from before.

As a result, IPOs, an alternate source for cheap capital, also slowed down because of weakened consumer sentiments in the backdrop of deteriorating builders' reputation, who failed to live up to their promises, thus causing buyers to feel the brunt of delayed delivery of projects.

The BSE Realty index, which reflects the performance of top-listed real estate players, was at its peak until 2008. After that, the index witnessed a slump due to weak macroeconomic conditions, rising unemployment, and declining real estate demand. However, the recent spate of reforms, including demonetization, RERA, and Goods and Services Tax (GST), has helped the market conditions improve due to increased transparency and accountability. With this, the realty index also seems to be heading north now.

Till date, around 16 private realty players and two government-owned real estate companies have opened their shares to the public. Of this, DLF (issued in 2010) owns the highest issue size of Rs9,000cr till date. In the consecutive five-year period, from 2011-16, there were no large-scale IPOs issued by big real estate players.

To the considerable relief all stakeholders, the struggling real estate sector is now stabilizing to some extent. As a result, real estate IPOs are also gaining momentum. Reports suggest that Mumbai-based Lodha Developers Ltd, Thane-based Puranik Group, and Bengaluru-based VBHC Value Homes are planning to raise funds through public offerings.

One predominant factor contributing to this spurt are the improving economic parameters, including GDP growth rate. Also, RERA implementation in 2017 raised the confidence of investors and end-users of real estate. After decades of disorganized eccentricity, the Indian real estate sector has transformed into an organized one, with improving transparency and accountability providing a new ray of hope.

Looking at the record-breaking number of IPOs in 2017-18, the current fiscal is also likely to remain robust with numbers suggesting that India Inc may collectively raise over Rs2,00,000cr in equity and equity-linked offerings. Real estate IPOs, which had taken a backseat over the last few years, are once again getting ready to ride the revival wave.