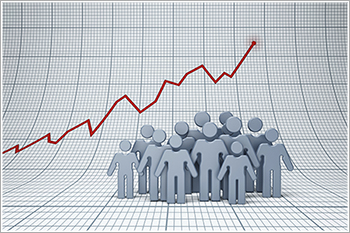 However, it is imperative to understand that demographics eventually shape the dynamics of an economy.

It’s the demographics stupid, and not economics! We all tend to dwell on the perception that the central bank’s monetary and government’s economic policies determine the growth trajectory of a nation. However, it is imperative to understand that demographics eventually shape the dynamics of an economy. The prevalent global economic landscape is an indication of things, where nations with weak demographics are suffering from a prolonged slowdown, while nations with young population have been able to withstand recessionary conditions. In this respect, US has witnessed several economic contractions during past decades, however the world’s largest economy manages to bounce back from the slump. Contrastingly, Japanese economy has been living under the constant shadow of deflation, wherein the sluggishness in the economic activity has been constant for the past 3 decades. Loose monetary policy and hefty government spending has failed to resuscitate the economy, as the demographic equation in the island nation is simply not inspiring.

In this respect, Japanese GDP unexpectedly contracted by an annualized 1.9% during Q3, preceded by a 7.3% decline during the prior quarter. The country’s economic trajectory has technically entered in to recession. Sluggishness prevails inspite of aggressive measures initiated by Japanese Prime Minister Abe to rejuvenate the economy. The regime introduced hefty monetary stimulus, public spending and economic reforms. Japan has been facing demographic woes, which has aggravated in to an economic problem. The population is ageing, fertility rates are declining, dependency ratios are widening and the economy is contracting. Even Europe is under the threat of deflation. The economy is in the state of dire straits, as cheap and easy money has not yet triggered higher business investments and consumer spending. Europe’s demographics are also undergoing deterioration with stagnant population growth and declining share of working people.

In US, the recent flow of numbers is in complete contrast with the economic conditions in Japan, China and Europe. US GDP economy grew at an annualised rate of 3.9% during Q3, higher than the initial estimate of the 3.5%. Growth for the second quarter was also upwardly revised to 4.6%. 2015 GDP growth is projected at 3.1%.  The economy has completely bottomed out and the landscape looks much better when compared with the scenario during the sub-prime crisis in 2008. The recovery would not have been possible if US had an ageing population and rigid immigration laws. The country is a melting pot of various ethnics and races.

It is also interesting to look at the Indian story, wherein the subcontinent nation has all the ingredients of a healthy demography. The country has growing population, higher degree of urbanisation and lower dependency ratio. Effectively, the country’s economy has managed to grow at a decent rate of 6-8% during the past decade. In fact, blend of demographic fabric and economic reforms helped the economy to withstand the repercussions of the global financial crisis during 2008.

The point is that rich demographics are a prerequisite for a sustainable economic growth trajectory. Monetary policies and efficient governments are important, but they need to coexist with the mentioned precondition. It will be naïve to completely discard the significance of economic policies, however history is a proof that lax monetary policies have failed to revive the economic fortunes of a nation, if the demographic story is feeble. The prevalent economic conditions in Japan and Europe are a classic example of the same. Various quantitative easing measures and artificially low interest rates have proved futile.  Demographic problems entail structural changes and not economic solutions. Otherwise, the economic woes get unnecessarily exacerbated.

Practically, demographic changes involve a pretty long gestation process. So a problem on hand may be simply incurable in the short run, wherein natural supply/demand forces should be allowed to run its own course.

Expediting solutions can prove lethal and aggravate the problems, wherein the situation can be reminiscent of the cliché “People often die of their remedy rather than the illness”.