While the majority of mainstream practitioners of Hindi films regard music essentially as a manipulative art, he cherished melody and nourished harmony in the same breath, often regardless of form, rhythm and timbre but always mindful of the given filmic situation. No wonder, almost all his compositions have outlived the shelf life of the films they belong to. 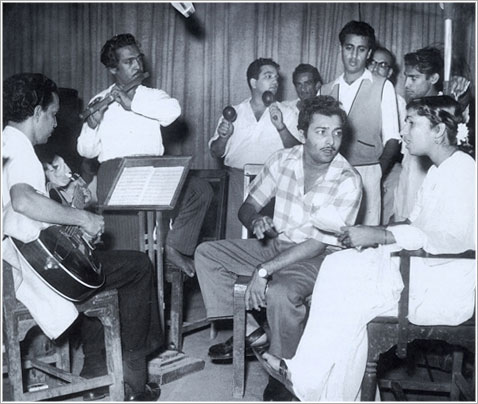 But during his lifetime, this connoisseur composer had to face the music of several purists and populists of the film world. The plagiarists were of course having a field day like they do even today. Orthodox musicologists grumbled that Madan Mohan employed classical ragas only at a surface level and hence fell short of elaborate musical explorations in the unrelenting focus on melody. For them, Madan Mohan was a musical craftsman at best; content to dress melancholic poetry in melodic garbs. The populists on the other hand opined that Madan Mohan failed to address market needs of foot tapping numbers that eventually turn chartbusters and win awards and accolades. They found him too classical for comfort, a maverick who disdainfully focused on songs tailored for a ‘Lata-like’ voice whatever they meant by that.

In reality, our learned gurus from both tribes were wholly incapable of the innovation that Madan Mohan brought to the music room and hence the ensuing envy obviously took many forms of expression: some decent, some not. Else, how could the callous classicists fail to admire his subtle contours that helped the ghazal form to unfold deeper meanings and evocative imageries? And what about his imaginative use of instruments and non-linear keynote changes both within and without raga bases? So if he consciously preferred dhun ragas and the ardhtala, what was the big issue especially if he could produce such divine melodies in the bargain?

Rather than indulge in undermining a great work of art, our revered experts could have probed deeper into the soul of Madan Mohan compositions that have lent idiosyncratic style to the rigours of classical music while granting impeccable substance to the vigour of popular music. This exploration could have helped them unearth countless defining traits of the master. This piece is not a musical dissection but one can’t resist mentioning a few Madan Mohan miracles like:

..The sole bulbous note in Woh Bhooli Dastaan that ably defined the ethos of the whole composition

…The divergent tunes and interludes of Yeh Duniya, Yeh Mehfil

…The redolent space given to defining words like ‘Phursat’ in Dil Dhoondtaa Hai, a song that he composed in nine different tunes.

His detractors could then have appreciated how Madan Mohan helped Lata Mangeshkar raise the bar for herself and film music by traversing different thematic moods (not just sombre as many would like to believe) - bubbly, naughty, inviting, animated or resigned, how he gainfully employed Rafi’s dexterity in Aap ke pehloo mein aa kar, Teri aankhon ke siwa and Ek haseen shaam ko, how he insisted only on Talat Mahmood and Manna Dey wherever he deemed fit and how he occasionally made inventive use of Kishore Kumar with such gems like Mera Naam Abdul Rehman, Zaroorat Hai, and Har koi Chahtaa hai(wish this pair did more work together for Kishore’s melancholic side was tailor made for Madan Mohan’s liking)

Many people including music historians like to believe that Madan Mohan was obsessed with pain and anguish (and hence he disregarded orchestrated exuberance). The sheer versatility of his compositions which includes many catchy numbers is enough to dismiss this claim but a cursory glance at his life book does suggest that he could have been instinctively drawn to pathos and its subtle expression through sombre tunes.

Despite his privileged background, he had to begin from scratch in his chosen field in the wake of stiff family opposition. He could not make it big as a singer and actor despite the pre-requisites he possessed in both departments. When he turned to composing, he could not rope in Lata Mangeshkar for his debut film despite the bond they had developed as co-singers much earlier. He regularly composed enduring melodies but their poor visual appeal, a forbidding function of lesser known banners and second rung artistes, undermined their warranted impact with irksome consistency. He had all the big names among his friends but was unwaveringly deprived of the big banners. Despite his proven success, very little mainstream doors ever opened for him. Yet each time a window opened, he created 24 carat masterpieces for prolific filmmakers including Chetan Anand (Haqeeqat and Haste Zakhm), Raj Khosla (Mera Saaya and Woh Kaun Thi), Hrishikesh Mukherjee (Bawarchi) and Gulzar (Mausam).But barring his work for the film Dastak, he won no award. Mere compliments came his way.

These days, Padmashrees are awarded like school trophies but no honor was ever bestowed on this legend, not even posthumously. Despite being the peerless composer that he was, he was denied even the basic composure that a music director needs for his job. The only moving frame of the legend, courtesy the popular TV show called Phool Khile hai Gulshan Gulshan hosted by Tabassum, reportedly lies untraceable in the Doordarshan archives. We learn that the Indian Postal Department has recently issued a stamp in his name but even that’s yet awaiting release.

This is not a mawkish attempt to justify his fag-end self-withdrawal that ultimately turned fatal. One may contend that he could have checked the self-infliction emanating from his depression before it consumed him. He could have exercised tact and discretion to strengthen his working relationships with the big fish in particular, others may argue. But if we consider the things the world could have done differently with him, we may well come closer to comprehending the tragedy of his life, a life which was otherwise so inimitably wholesome that it would be unfitting to remember him only as a composer.

He was an upright army man, accomplished singer, self-taught sitar and harmonium player, natural athlete and sports enthusiast, culinary expert and above all, a kind soul who lived life king size on his own terms. Had he been alive today, he would have dissected the subtleties of a Tendulkar or a Dhoni with the same finesse with which he unfolded a musical rag. He could have enlightened us with his culinary secrets and travel experiences more engagingly than the umpteen TV hosts blabbering on myriad channels. He could have lectured on the creative pleasures of housekeeping and physical labour with equal ease. The very fact that he could do so much more may well have tempted the world to offer him as little creative space as possible. Insecurities often come in different forms and flavours. Else, some of our esteemed icons who shower endless citations on the legend today wouldn’t have kept mum while he was around. This versatile genius was perpetually trapped in a cesspool created by conceited contemporaries, spineless admirers, tight-lipped relatives and above all scores of ignorant listeners who loved his music all right but couldn’t fetch it its rightful place.

It’s evident that Madan Mohan did not believe in compromise of any kind. That he was made to pay a heavy price for it is can’t just be the handiwork of vested interests. It’s also the result of our collective mediocrity that appreciates music in largely visual terms, a ludicrous pastime that now fuels mindless ‘You Tube’ and ‘Facebook’ debates on personal favourites using the choicest expletives besides the repulsive sms-based voting systems that eliminate genuine prodigies like Aakash Sharma and create half-baked idols only to stifle their impending evolution. In that sense, all of us are partially responsible for the liver cirrhosis that eventually claimed Madan Mohan’s life. 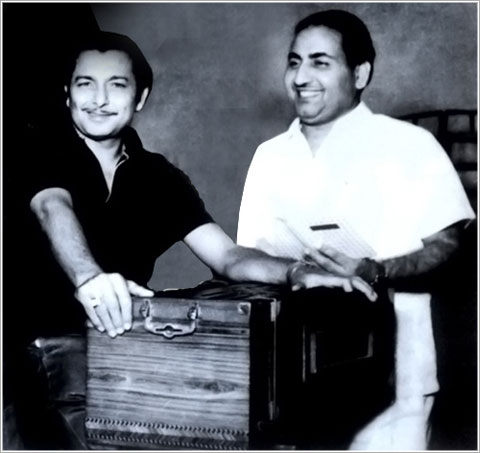 This tribute will be incomplete without mentioning the outstanding website www.madanmohan.in that his son Sanjeev Kohli, an MBA from IIM Calcutta and ex-CEO and consultant, YRF Studios, has painstakingly created for the benefit of scores of Madan Mohan admirers across the globe. This is not your everyday homage that compassionate sons usually bestow upon their illustrious fathers; it’s a highly detached and dignified attempt to put Madan Mohan’s turbulent life in perceptive –complete with his biography, filmography and heartfelt tributes from friends, peers, admirers and associates from all walks of life. Sanjeev has judiciously captured his father’s monologues and prologues to many songs which are as meaningful as the compositions. (Don’t miss ‘Mai ree’ in his touching voice. He may lack Lata’s vocal finesse but she can never reproduce the dard he conveys through the rendering.)

Some of our other great composers like Salil Chaudhary, Roshan, Jaidev and Ravi also deserve equally rich web archives as eternal gifts from their descendants. In some cases, the progenies happen to be Bollywood super stars but that’s not helped this cause one bit. Hope these luminaries take a cue from Sanjeev’s supreme effort which is as monumental as his initiative in recreating Madan Mohan’s era in Yash Chopra’s romantic drama Veer Zaraa.

In Indian mythology, Dhruvapada or the Pole Star position is the ultimate seat of tranquillity which guides the universe in celestial navigation as also in determining latitude. In the world of Hindi film music, Madan Mohan is one pole star that can help emerging singers and composers establish their musical co-ordinates if they care to tune in. There’s so much to learn from a Madan Mohan composition that any music lover would intuitively keep coming back to it. In an age of impoverished specialization, he remains a true artist. It’s heartening to note that composers like Salim Suleiman, Amit Trivedi, Sneha Khanvilkar and Ram Sampat are making refreshing experiments in recent times. They would immensely benefit from a Madan Mohan mindset which thrives on spontaneous innovation perfectly in line with the cinematic cause leaving the rest including the best of technology and instruments merely incidental to the job. Else, the formulaic rat race is bound to erode their creative streak someday as is evident from the progressive dilution of even a few greats like A R Rahman and Shankar-Ehsaan-Loy.

Madan Mohan had a cosmic connect with some of his lyricists like Raja Mehdi Ali Khan, Kaifi Azmi, and Rajinder Krishan. Many of their lyrics mirrored the trials and tribulations of his personal life. But the words that were destined to epitomize the maestro’s worth for posterity come from Majrooh’s poignant verse made immortal by Lata Mangeshkar’s silken voice of 1953, undoubtedly the greatest tribute ever to Madan Mohan: