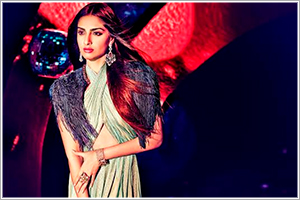 The Gem and Jewellery Export Promotion Council of India (GJEPC), the apex body of the gem & jewellery industry operating under the supervision of the Ministry of Commerce & Industry, Government of India announces ‘The Artisan Jewellery Design Awards 2014’ scheduled in December 2014.Having hosted award and reward programs for the industry over 25 years, GJEPC now invites participation from all established and budding designers across the nation to bring out the best of their designs and present it by August 15h, 2014. The award celebrates ‘100 years of Indian cinema’ showcasing iconic jewellery with brand Ambassador SonamKapoor.

The award aims to celebrate the highest levels of artistry, innovation and individuality, elevating jewellery designers to their rightful status as artists. The award encourages designers to take their creativity and design aesthetics to the next level in a bid to showcase world-class pieces. The award invites a multitude of talented designers to converge under the realm of this contest and exhibit some exquisitely designed jewellery pieces.

Influential fashion icon, and GJEPC Brand Ambassador SonamKapoor says, "I believe jewellery is an expression of one’s individuality. Artisan Jewellery award is a wonderful initiative by GJEPC that provides an apt platform to all designers to showcase their creativity and talent. It is an opportunity for promising designers to create innovative designs that will appease the fashion conscious woman of today.”

Commenting on the occasion, Chairman, GJEPC India, Mr. Vipul Shah says, ‘Indian cinema symbolizes Indian life and culture. In an ode to this strong influential medium of art that touches various aspects of our lives, we provide this platform to jewellery designers to present their talent to an esteemed panel of judges which will bring the finalists accolades and put them on a road to stardom”.

Speaking on the occasion, Co-convener,National Exhibition, Mr. Milan Chokshi says, “The Artisan Awards is designed to empower designers with a platform that enables them to reveal their creativity and present extraordinary jewelry. We believe the awards will bring alive the enchanting ears of Indian cinema with alluring trinkets”

The competition has four distinct categories namely the ‘Monochromatic Era’, ‘Golden Era’, ‘Colourama Era’, ‘Avant Garde Era’. Each category has 4 shortlisted movies based on which designers will have to present their sketches for the first round. The Monochromatic era brings back the diamonds and pearls coated in precious metals in black or white color. The Golden Era highlights Indian women’s fascination towards yellow metal which has been a testament to India’s glory years. The Colourama period infuses colour to jewellery through multi-coloured precious metal & gem stones. The Avant-Garde is all about employing global techniques and path-breaking design for the creation of innovative jewellery.

The dazzling awards night will be a culmination of designs, creativity, jewellery and glamour to showcase a fitting tribute to Indian cinema.  The criteria for judging will be dependent on the thematic relevance per era and rules defined per category. Upon shortlisting a particular sketch, a four member team would select the appropriate manufacturer for the prize. In case of amateur designers, a manufacturer will be provided in-house.

The winners of the 4 categories of the Artisan Awards will receive the following giving them an added reason to smile:

Monochromatic Magic (The silent era to the talkies)

Classic jewellery dominated this era with Black & White movies which were center stage. Themes from epics and mythology found a magnificent portrayal in monochrome.

This period marks the changing face of Indian cinema and it transformation to Glamour age from 1940’s to 1960. Big budget productions with grand sets, magnificent costumes and memorable music, depicting the glory of cinema started taking form.

The era of masala film takes light in this period and it guarantees thrills with its hit formula of elaborate song and dance routines, action and typical characters with iconic dialogues. The movies produced in this time were blockbusters and ever green.

Gems & Jewellery sector is expected to achieve the export target of $40 billion this year: Piyush Goyal