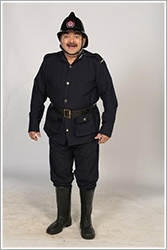 The show is a wholesome family entertainer and will hit the small screen on 18th August and shall be aired Monday to Friday at 10 pm.

SAB TV, India’s most loved family channel is all set to launch a unique comedy revolving around the amusing trials and tales of neighborhood’s favorite firefighter ‘Chandrakant Chiplunkar Seedi Bambawala’. The TV series, named after the protagonist itself, features industry veterans Prashant Damle and Kavita Lad as an exceptional Marathi – Gujarati couple. The show is a wholesome family entertainer and will hit the small screen on 18th August and shall be aired Monday to Friday at 10 pm.

The show by Dharmesh Mehta from NamanRaj Productions, is an industry first when it comes to its unique story line around the firefighters’ community and their families. It explores the humorous life of the Chiplunkar family and its interesting mix of neighbors who always come together to help each other. The plot gets its humorous flavor from the genuine selfless character trait of Chandrakant Chiplunkar which inhibits him from refusing help to any person eventually landing him in a conundrum! The TV series shall showcase the funny incidents that the firefighter gets involved in and the hilarious events that ensue after his cosmopolitan mix of extended family join hands to assist him in his endeavors often resulting in a comedy of errors!

Anooj Kapoor, Senior EVP & Business Head - SAB TV said, “SAB TV’s unique proposition has always been differentiation through innovation. With Chandrakant Chiplunkar Seedi Bambawala, we at SAB TV add yet another show with a distinct concept to our foray. The show accentuates SAB TV’s core belief of ‘Asli Mazaa SAB Ke Saath Aata Hai’ and beautifully illustrates the positives of joint family system. The story revolves around the heroics of a good-hearted and helpful fireman”.

“We have had an excellent long-standing relationship with Dharmesh Mehta and have also worked on a number of hit shows in recent past. The lead protagonist is being played by the one of the finest actors, Prashant Damle, we are glad to welcome him into the SAB family”

Dharmesh Mehta, Producer – NamanRaj Productions said, “We have had an excellent relationship with SAB TV. In the past too, we have worked together on shows like Taarak Mehta Ka Ooltah Chashmah, R K Laxman Ki Duniya, Paapad Pol, etc. Most of our successful shows have been with SAB TV. With Chandrakant Chiplunkar Seedi Bambawala, we aim to offer the viewers a look into the life of an ever-so-selfless firefighter and the funny situations he gets into”

Prashant Damle, veteran actor further added, “I am truly excited to play a firefighter and be a part of this innovative show which focuses on the goodness and courage in people to help others. This TV series is my first foray into the Hindi television industry and it gives me great pleasure to be a part of SAB TV that reaches across to families across India. It’s an honor working alongside a stellar established star-cast such as Kavita Lad and Anang Desai and all of us look forward to make our viewers laugh!”

Chandrakant Chiplunkar is all set to enthral audiences across the length and breadth of the country with his funny antics and his uncanny fire-fighting skills.

Discipline and perseverance: The secret to trading success