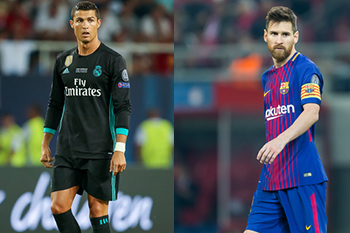 For a long time the world of soccer has been dominated by larger than life personalities. In fact, soccer would have been a dull game without these superstars. Imagine the world of soccer without Pele, Maradona, Zidane, Eusebio, Cryuff, Charleton, Puskas, Messi and Ronaldo. The game would have been absolutely dull without these geniuses. Surprisingly, for every superstar who could take his team to a Soccer World Cup title, there is one superstar who could never take his team across the finish line. Pele, Maradona, Zidane and Charleton took their respective teams to victory at the World Cup. However, despite their irrefutable talent, Eusebio, Cryuff, Puskas, Messi and Ronaldo could never make their teams lift the World Cup.

What does this say about superstars? Is it that some superstars are better than others? Not at all! The moral of the story is that winning a world cup title is not just about superstars. A lot many factors need to come together to take a team past the finish line. That is exactly how your portfolio works. Your star stocks do give a certain charm and panache to your portfolio but it is only when all the pegs fall in place that your portfolio will actually outperform.

Oh, to have a Messi and Ronaldo in my portfolio

A highly celebrated investor is about the handful of picks that turned out to be multi-baggers. Everybody loves to tell the story of how an Rs1 lakh investment in Havells in 1996 grew to over Rs28cr by 2016. These are the stuff that legends are made of. That is like a soccer star. Matches are still remembered for the superstars who scored those incredible goals. Be it Maradona’s “Hand of God” in the 1986 semi-final or his decisive dribble in the 1986 final or Zidane’s impossible header in the 2002 final; these are the stories that are passed on. So you surely need a Ronaldo and Messi in your portfolio so that you can tell the story and feel good about it.

What is really so exciting about a stock that grows steadily at 12% each year. Over a 20-year period the stock may create huge wealth but that is not creating your alpha. The alpha in your portfolio comes from the Eicher and TTK Prestige of the world that turn out to be hundred-baggers in a span of 10 years. These are the stocks that create the alpha and quote at fancy valuations. That is also the reason the likes of Messi, Ronaldo and Neymar command those million dollar fees. They are persons who create the alpha in soccer.

But is it enough to have Messi and Ronaldo in my portfolio?

1) A few swallows do not make a summer

Have you ever wondered why Netherlands never won the World Cup? They were finalists in 1974, 1978 and again in 2010. They lost on all three occasions. It is not that they did not have the stars. They had Johann Cryuff, Marco Van Basten, Ruud Gullit and Van Persie. They have often faltered in the finals despite the presence of the stars, because a few swallows do not make a summer. Have you imagined why Germany without really producing superstars managed to win four world cups? They have cracked the formula of playing soccer as a team. That is what makes Germany so formidable. When you create an investment portfolio, it should be closer to Germany. It should be stable, reliable and must deliver when it matters the most. Create an investment portfolio that resembles German Soccer.

2) It could lull you into a sense of complacency

This is equally true of soccer and investing. When you pick a few stars, you are lulled into a sense of complacency. But portfolio returns is not just about a handful of stars. Unless you’re entire portfolio is pushed hard to perform at the highest level, your portfolio can never really outperform. Spain won the World Cup in 2010 and Germany won the World Cup in 2014 purely on the back of preparedness, fitness and combination. When it comes to investment, getting the combination right is a lot more important than getting your big stars. If you can put your research, execution and risk management in place, it can be a wonderful combination that will give you a Goliath-beating investment portfolio.