With the 2014 General Elections (Lok Sabha) underway, voters have been closely evaluating the manifestos of AAP, BJP and Congress. Conversations on social networks have been buzzing with netizens discussing the various developmental programmes promised by the political parties. TO THE NEW, Asia’s leading integrated digital services network, has released a report that analyzes digital conversations across various social platforms such as Twitter, forums and news sites that took place within three days from the date the manifesto was released for that party. The report, powered by ThoughtBuzz, the social media analytics’ arm of the company, also tracks the sentiment around the manifesto and shares “word clouds” that highlights the key sentiments that are dominating the social platforms. 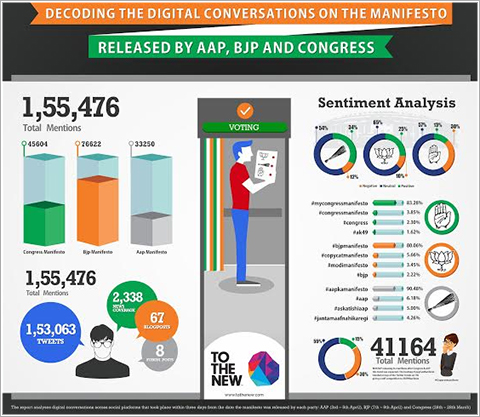 The report reveals that mentions of BJP’s manifesto far outnumbered that of political rivals AAP and Congress with a whopping 76,662 mentions on the social platforms in the span of three days of the release of the party manifesto. In contrast, Congress had 45,604 mentions followed by AAP with 33,250 mentions.

Commenting on the report, Irfan Khan, Marketing Head, TO THE NEW said, “The 2014 General Elections has seen immense interest and vocal participation of the youth. The release of the manifestos by the political parties has given the young and the “first-time voters” the opportunity to evaluate and make an informed decision. The report on the buzz around manifesto enables us to understand the psyche of these voters.”

In the run up to the Lok Sabha Elections, TO THE NEW, tracks the most talked about politicians and parties across social media on a daily basis and analyzes conversations and emerging trends across social platforms in real-time.

Expenditure on central government pensioners stood at over Rs2.54 trillion in 2021-22