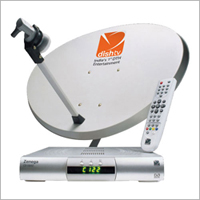 Shares of Dish TV are trading higher by more than 3% after media sources suggested that direct-to-home (DTH) operations of the company and Bharti Airtel may merge.

The Economic Times reported that Bharti Airtel, the promoters of Dish TV, and private equity firm Warburg Pincus have agreed to merge DTH operations of Airtel and Dish to create the world’s largest TV distribution company.