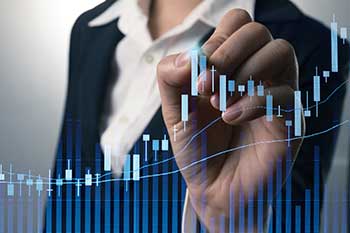 Domestic markets hold on to gains and continue to hover around its day's high. HDFC, ICICI Bank, Maruti and Infosys among top contributor the Sensex gain, while HDFC Bank, Sun Pharma and ITC were laggards in the afternoon session.

On the other hand, Ashok Leyland, Tata Motors and Bajaj Auto were trading in the red zone.

Shares of Ashok Leyland extended losses for the fifth straight day. The company has reported a net loss of Rs57cr in Q4FY20 due to lower revenue on account of the drop in volumes.

From the metal space, the index is also trading up by 1%. SAIL, Jindal Steel, Tata Steel, Hindalco and NMDC surged 2-5%, respectively.

Tata Steel soared over 5% on Sensex during Tuesday's trading session, despite the company reported a net loss of Rs1,095.68cr during the quarter ended March 2020 (Q4FY20) compared to a profit of Rs2,430.92cr in the corresponding period of the previous year. Its consolidated revenue dropped by 20.40% in the quarter to Rs33,769.95cr as against Rs42,423.86cr a year ago same period.

Meanwhile, investors also keenly watched for the government's guidelines for the second phase of Unlock and PM Narendra Modi's address to the nation at 4 pm.