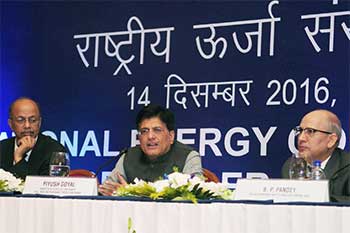 In a bid to cut emissions, country’s largest power producer, NTPC lined up investments worth Rs 5000 crore and has decided to replace its over 25 year old power plants totalling 11 GW capacity in the next five years.

Informing the gathering about a slew of measures taken by the Government to increase energy efficiency, Goyal said that the Nation has embarked on a mission to reduce India’s carbon footprint by phasing out all inefficient thermal power plants, older than 25 years, with modern energy efficient super critical ones.

NTPC has already given the in-principle clearance to replace around 11,000 MW of its old, inefficient thermal power plants. The plants would be replaced in about five years, with an investment of around Rs 50,000 crore, he added.

“1 unit of electricity saved is equivalent to avoiding generation of 1.33 units. 25% of energy produced in India is wasted which can be saved by bringing a change in mindset of each citizen. There is a need to effect a behavioural change to ensure participation of each citizen in environment protection, and the change should ideally start from children” said Union Minister of State (IC) for Power, Coal, New & Renewable Energy and Mines, Piyush Goyal.

“16,000 households in about 800 inaccessible villages in India which lack grid connectivity. The Ministry would be providing, to each such household, a 300 KW Solar panel, 8-hour battery backup, 5 LED bulbs, an energy efficient ceiling fan and a solar power based mobile phone charging socket, all free of cost under the Deen Dayal Upadhyaya Gram Jyoti Yojana (DDUGJY).

Further, all the companies under the Ministry of Power, under their CSR initiatives, would be providing a solar power based television set to these households. Through this initiative, the Minister added, the children who were deprived of electricity for years would get a chance to integrate with the global community” added Piyush Goyal.

“According to the latest figures from UJALA dashboard, over 18.38 crore LED bulbs have been distributed by EESL and another 25 crore by private sector companies. This drive has witnessed an unthinkable reduction of around 88% in LED prices in just 20 months, which led to an annual saving of around Rs. 10,000 crores for the consumers. The savings would scale up to Rs. 40,000 crores in the next 3 years” said Piyush Goyal. “He said that a 20 MW solar power plant has been established and a draft plan has been prepared to scale the solar power capacity in the islands to 100 MW. The Minister also added that India’s solar rooftop capacity would see a jump of 200 times to reach 40GW by 2022, wherein all the commercial and residential buildings would be covered.”