x
Home » Top News » Youth of our country, are our future: Pranab Mukherjee 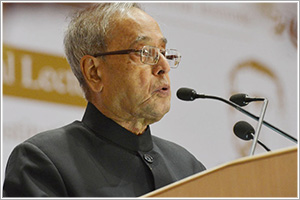 Youth of our country, are our future: Pranab Mukherjee

Institutes of higher learning are the cradle of future administrators and policy makers said President of India.

Pranab Mukherjee, President of India has given the speech at the higher educational and research institutions on the topic, “democracy and governance”

He added "I am happy to address you at the beginning of this new academic session. I welcome all the students who have joined universities and other centres of higher learning for the first time. During the Annual Conference of Vice Chancellors of central universities held in the Rashtrapati Bhavan in February 2013, it was decided that I will have e-interaction with academic institutions twice a year - once in the beginning of the calendar year and again in August, on commencement of the academic year. I first interacted through this e-platform in January, 2014. I express my gratitude to Prof. S.V. Raghavan and his team at the National Knowledge Network, and the NIC team, for making this video-talk possible.

Dear Students:
You, the youth of our country, are our future. You have a stake in the progress of this nation and the welfare of its people. General Elections to the 16th Lok Sabha were held in April and May, this year. Election is a great festival of democracy and a crucial milestone in a nation’s journey towards peace, progress and prosperity. Many amongst you have voted for the first time in the elections this year. That how deep the roots of our democracy are can be gauged from the fact that from a level of about 58 per cent in both the 2004 and 2009 General Elections, the voter turnout has gone up to an encouraging 66 per cent in this year’s Elections. I compliment you for your enthusiastic participation in this largest democratic exercise of the world.

This Election has provided majority to a single party for the formation of a stable government after thirty years, with a mandate to provide good governance. Good governance is a mechanism to establish order, pursue social and economic progress and promote welfare of the people. As developing countries grapple with a multitude of socio-economic objectives, standards of governance have come into sharp focus in recent years. In this backdrop, I have chosen to speak to you today on an issue of contemporary relevance - Democracy and Governance.

Friends:
Though good governance entered the lexicon of development two decades back, its essentials were prevalent in India since ancient times. In Arthshastra, Kautilya had described the qualities of a King as and I quote: "The happiness of the people is the happiness of the king; their good alone is his, his personal good is not his true good; the only true good being that of his people. Therefore let the King be active in working for the prosperity and welfare of his people” (unquote). On the eve of India’s independence, Pandit Nehru in his ‘tryst with destiny’ speech outlined the aim of a free India as the ending of poverty, ignorance, disease and inequality of opportunities. It was evident that political freedom would carry little meaning without social and economic justice.

At the time of Independence, we the people of India chose democracy as the form of government. Our democratic ideals flow from the Constitution, which reflects our civilizational values. The Preamble, the Fundamental Rights, the Fundamental Duties and the Directive Principles of State Policy contain the ingredients of good governance. In the Preamble, we resolved to constitute India into a sovereign socialist secular democratic republic and to secure to all its citizens: Justice, social, economic and political; Liberty of thought, expression, belief, faith and worship; Equality of status and of opportunity, and to promote among them all; and Fraternity, assuring the dignity of the individual and the unity and integrity of the Nation. Fundamental rights are essential to preserve human dignity. Human dignity cannot be assured without the elimination of poverty. The Directive Principles are an essential guide to good governance practices. Only good governance can eradicate deprivation and backwardness. In the landmark judgment in the case of Kesavananda Bharati vs. State of Kerala in 1973, the Supreme Court observed that both Directive Principles and Fundamental Rights are equally ‘fundamental’. The Constitution has given us the three pillars of democracy - Parliament, Executive and Judiciary. The provision of freedom of speech and expression has given rise to a powerful and vigilant media.

In India, I see good governance as exercise of power, within the framework of the Constitution, for efficient and effective management of our economic and social resources for the well-being of the people, through the institutions of state. Our Constitution is a living document which has evolved with time and within its spacious provisions accommodated the changing needs of a growing democracy. It is a constant reminder of our civilizational values, which we at times tend to forget. We will do well to remind ourselves, at least occasionally, that these values are sacrosanct in the functioning of our democracy.

Friends:
Good governance is not a given in any system. It has to be nurtured by carefully developing institutions of democracy. Distortions happen when one institution does not function in the manner expected of it leading to overreach by others. What is required then is strengthening, re-invigorating and re-inventing these institutions to meet the needs of the time. It calls for wider involvement of the civil society. It entails free and open participation in the political processes by the people. It calls for ever-increasing engagement of the youth in the institutions and processes of democracy. It calls for ethical and responsible behaviour from the media.

Good governance is critically dependent on pre-requisites like inviolable adherence to rule of law, existence of participatory decision-making structure, responsiveness, transparency, accountability, corruption-free society, equity and inclusiveness. In short, good governance implies a framework that has well-being of the people as its focal point. Progressive legislations provide an enabling environment and empower citizens to access entitlements. Some examples are the right to Information, education, food and employment.

Novel legislations can work only with robust delivery mechanisms. Corruption leads to denial of equitable distribution of benefits. Complexity and opacity of rules and procedures, discretion in the exercise of power, and weak enforcement of legal provisions are factors contributing to corruption. While we might need some new institutions to fight corruption, the solution lies not merely in creating more institutions but in strengthening and reforming the existing institutions to deliver results.

Good governance calls for adequate decentralization of power. Panchayati Raj institutions need financial autonomy and administrative ability. Reforms in this third tier of governance are necessary for sharing of real power with the people.

Governance implies involving the civil society as an equal collaborator. One must therefore be conscious of her duties and responsibilities, besides rights. Intolerance and acrimony in public discourse has to be avoided. Our country needs constructive partners rather than privilege seekers. I call upon you to contribute to a healthy democratic society and good governance practices in all spheres of functioning.Friends and dear students:

Dr. S. Radhakrishnan had once said and I quote: "All education is, on the one side, a search for truth; on the other side, it is a pursuit of social betterment. You may discover truth but you should apply it to improve the status of society” (unquote). A sound education system is the bedrock of an enlightened society. Our institutes of higher learning are the cradle of future administrators and policy makers. The seeds of progressive thinking have to be sown and nurtured here. The core civilizational values of love for motherland; performance of duty; compassion for all; tolerance for pluralism; respect for women; honesty in life; self-restraint in conduct, responsibility in action and discipline have to be inculcated in these institutions.

A democracy cannot be healthy without informed participation. You, dear students, are amongst the brightest young minds in this country. The society has invested in you, and in return, you owe something to the society. You are entrusted with the people’s hopes and expectations. Read, learn and formulate views on national issues. Make the governance of this country your passion. Choose to engage with our beautiful but sometimes noisy democracy. As the future practitioners of governance, you have to play an active and positive role in ensuring that these institutions perform their duties with responsibility.

In the context of our democracy, good governance is a reflection of the successful functioning of the institutions of state with the singular intention of the well-being of citizens at heart. With these words, I conclude. I now leave the floor for a few questions.