Abbott India announced the national results from a study assessing the prevalence of hypothyroidism in India that was published in the July 2013 issue of the Indian Journal of Endocrinology and Metabolism.

The Thyroid Epidemiological Study team was led by Dr. A. G Unnikrishnan, Principal Investigator of the study and CEO and Endocrinologist, Chellaram Diabetes Institute, Pune and other researchers.[1] This study initiated by Abbott is India’s first cross-sectional and multi-city study to quantify prevalence of thyroid dysfunctions in the post iodization phase in Bangalore, Chennai, Delhi, Goa, Mumbai, Hyderabad, Ahmedabad and Kolkata.

Key results from the study: 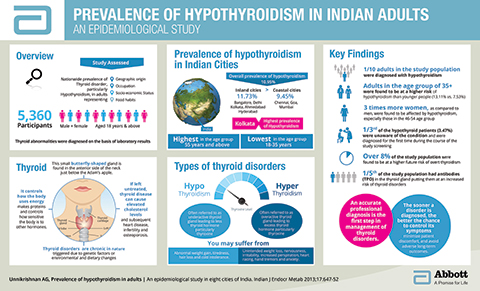 “Thyroid disorders in India are characterized by a high prevalence, minimal diagnosis, poor awareness and low involvement of doctors in treatment. There is a growing urgency to create awareness of thyroid disorders, the need for early and regular diagnosis and the importance of following a recommended treatment regime,” said Dr. A. G Unnikrishnan, Principal Investigator of the study and CEO and Endocrinologist, Chellaram Diabetes Institute, Pune. “The study findings call for a review of current practices in the management of thyroid disorders. There should be an emphasis on active screening of endocrine function among patients at greater risk along with regular monitoring of thyroid status and dose adjustments to provide effective therapy in patients with established diagnosis.”

Dr. Mahesh Padsalge, Mumbai Investigator of the Study and Consultant Diabetologist, Diabecare - Specialty Diabetes Centre said, “Of the 1,259 people in Mumbai, 9.61% were diagnosed with hypothyroidism, of which 2.86% were screened for the disorder for the first time. Approximately one-fourth (25.42%) of the population from Mumbai tested positive for anti-TPO antibodies, hence putting them at a greater risk of developing thyroid disorders in the future.  Increasing exposure to substances that have the potential to impair thyroid function, like industrial and agricultural contaminants, is identified as a growing health concern in India.”

Globally, thyroid disorders continue to be common yet one of the most under-diagnosed and neglected chronic health conditions. These disorders impair normal functioning of the thyroid gland causing abnormal production of hormones leading to hyperthyroidism or hypothyroidism. The prevalence of hypothyroidism in the developed world is estimated to be about 4-5%. [2]

If left untreated, hypothyroidism can cause elevated cholesterol levels, an increase in blood pressure, an increased rate of cardiovascular complications, decreased fertility, and depression; and in pregnant women, placental abnormalities and increased risks for the baby’s well-being. These symptoms are often confused with other disorders, thus making thyroid disorders one of the most underdiagnosed disorders in India. Like diabetes, there is no permanent cure for most forms of thyroid disorders, but with medication and precise treatment, thyroid disorders can be controlled and patients can live normal lives.

Rehan A. Khan, Managing Director, Abbott India, said “Our objective of undertaking a nation-wide comprehensive epidemiological study is to get a true picture of the evolving profile of thyroid disorders in the post iodization phase in India. By partnering with various stakeholders, Abbott is seeking to advance understanding, increase awareness and support proper diagnosis of thyroid disorders in our country.”