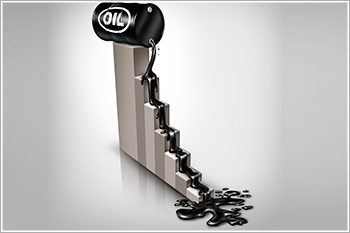 Prices can drift lower towards the crucial support level of US$43/bbl. Breach of the same can also propel the prices towards the abysmal low of US$33/bbl.

Although US oil producers are scaling down on capital expenditure plans, they are learning to live with lower oil prices. It is widely reported that the producers are endeavouring to lower the production costs and in the process withstand the scenario of low oil prices. In addition, OPEC seems to have decided to not interfere and let the market forces determine the prices. The cartel will unlikely change its output levels until June, as it is projecting demand growth to remain uninspiring.

During the course of February, Crude oil prices derived an element of support from the sharp decline in US rig count activity. The rig count (measured by Baker Hughes report) has fallen to 922, down from 1600 rigs in October. Fresh buying emerged around the crucial support levels of US$43-45/bbl (WTI), which paved the recovery till US$53-54/bbl. However, the broader price trajectory remained fragile considering the fact there are no signs of moderation in the output from OPEC nations. OPEC output during February is reported at 30.05mbpd, constantly higher than the production quota of 30mbpd.  On non-OPEC side, US oil inventories have surged by more than 66mn barrels during this year, with total stockpiles standing at an 80 year high of 448.9mn barrels. Total non-OPEC output continues to grow, with Energy Intelligence reporting the January production figure at 57.33mbpd, higher the prior month reading of 57.05mbpd. On demand side, IEA raised its demand number by 200,000bpd, while OPEC sees offtake up by 430,000 bpd. The EIA expects modest 140,000bpd expansion in demand for OPEC’s crude, however overall global demand picture is expected to remain murkier.

On supply/demand balance, Energy Intelligence numbers state that global markets during January witnessed a surplus of 3.7mbpd, much higher than the surplus of 1.9mbpd during December 2014. On geopolitical front, negotiations between US and Iran on nuclear deal are progressing, with both the sides striving hard to reach an agreement before the March 31st deadline. Reports suggest that an outline of an agreement could restrict Tehran's nuclear activities for at least 10 years before easing limitations on the program. Iran may also be forced to ship out most of the enriched uranium to prevent its conversion for weapons use. Meanwhile, Israeli Prime Minister warned United States that it was negotiating a bad deal with Iran, which can potentially spark a nuclear nightmare.

In the short run, the next trigger for oil prices will be the Iran negotiations. In event of a successful agreement, prices can drift lower towards the crucial support level of US$43/bbl. Breach of the same can also propel the prices towards the abysmal low of US$33/bbl.

Price of fuel on October 6

Asian shares are up today, in early trading