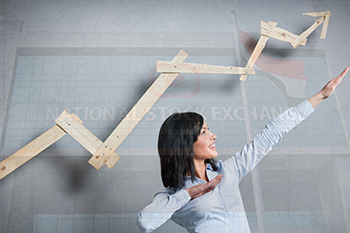 Today’s rally was led by blue-chips like HDFC, Infy, TCS, Reliance Industries, Tata Motors and ITC, while as many as 68 stocks registered fresh 52-week high. Nifty managed to gain over 200 points in the past three trading session.

After taking a breather in the previous trading sessions, the Indian equity market resumed its upswing as Nifty zoomed over 70 points to shut above the 8500 mark. Declining WPI, strengthening rupee against the US Dollar and strong global cues boosted the sentiment on Dalal Street.

Today’s rally was led by blue-chips like HDFC, Infy, TCS, Reliance Industries, Tata Motors and ITC, while as many as 68 stocks registered fresh 52-week high. Nifty managed to gain over 200 points in the past three trading session.

Wholesale prices slipped further in June, marking the eighth straight month of deflation. Inflation fell to -2.4% in June compared with a -2.36% in May. Commenting on the WPI data release on Tuesday, Amar Ambani, Head of Research, IIFL said, “India’s wholesale price index during June fell at an annual rate of 2.4%, the eighth consecutive monthly decline. The contraction is clearly attributed to softness in oil prices. Wholesale prices during May declined by 2.36%. Earlier, the government reported that retail food inflation during June surged to 5.48% from 4.8% during the prior month. This can be attributed to rise in food grain prices on account of series of unseasonal rains this year. Spike in inflation can dissuade the central bank from initiating further monetary easing measures.”

Global markets today will closely follow the outcome of the Greece Parliament - which is scheduled to vote on a sweeping austerity package to secure the funding it needs to stem its fiscal crisis and remain in the euro zone.  Also investors would be keenly watching the comments from the US Fed Chief Janet Yellen's two-day testimony.

Back home, the broader market to an extent under-performed the key benchmark indices. The CNX Nifty Junior ended unchanged at 20,506. The Midcap index advanced 0.3 percent to 13,513, and the Smallcap index was up 0.5 percent at 5,603.

The breadth was marginally positive - out of 1,719 stocks traded on the NSE, 851 advanced and 644 declined today.

Maruti Suzuki scaled to a fresh life-time high at Rs. 4,180 and ended with a gain of 2.5 percent at Rs. 4,152 following some brokerage upgrades.

Tata Motors bounced back to end with a gain of 2 percent at Rs. 394 on the back of strong European sales data. According to media reports, Jaguar Land Rover (JLR) reported 18 percent sales growth in UK and 16 percent in Europe on a year-till-date basis.

On the flip side, Cairn India declined over a percent to Rs. 168. Yes Bank and Punjab National Bank were the other notable losers, down nearly a percent each at Rs. 805 and Rs. 143, respectively.

Among others - Shares of education related companies were in demand today on the event of Prime Minister Narendra Modi launching 'National Skill Mission' a scheme aimed to create large pool of skilled workforce required to sustain the ambitious 'Make in India' initiative.

Educomp Solutions and Everonn Education were locked at the 20 percent upper circuit each at Rs. 14.28 and Rs. 30, respectively. NIIT and Aptech surged over 4 percent each to Rs. 53.30 and Rs. 69, respectively. Zee Learn, however, pared gains and ended on a flat note at Rs. 35.05.

Pennar Industries surged to a high of Rs. 57.35, before ending a percent higher at Rs. 55.30 following news report that its subsidiary firm Pennar Engineered Building Systems has received approval from market regulator Sebi to float an Initial Public Offer (IPO).

Sun TV slipped nearly 4.5 percent to Rs. 267 on suffering a fresh blow to its business after an inter-ministerial panel reportedly rejected the Sun Group's application to participate in the next-stage FM radio auctions. According to media reports, the company application has been rejected as the company's renewal request for the network's 33 TV channels remains in lingo after been denied permission by the home ministry.

Havells India jumped to a high of Rs. 305 after the company today informed BSE that it has launched world class products in Switchgear segment in the Eastern Region. The stock however ended flat at Rs. 299.

Adhunik Metaliks was locked at the 20 percent upper circuit at Rs. 18.80 after the company's subsidiary Orissa Manganese & Minerals was granted extension of lease for its three manganese ore mines (Patmunda, Orahuri & Kusumudhi) till March 31, 2020 under merchant category.

Aban Offshore extended rally and jumped another 1.5 percent to Rs. 327 following the historic nuclear deal between Iran and six major powers. The company is engaged in oil exploration and production and is generating 35 percent of its revenues from Iran.

Ahluwalia Contracts rallied 5.5 percent to Rs. 238 after Franklin Templeton Mutual Fund - Franklin India Smaller Com on Tuesday bought around 417,000 shares of the company in a bulk deal at Rs 220.57 on the NSE.

A total of 68 stocks registered a fresh 52-week high in trades on the NSE today, while 14 stocks dropped to a new 52-week low.

Markets may see a day in green today, after some days in red