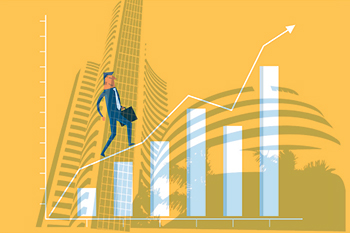 Among the 50 stocks of the Nifty, Zee, Eicher Motors, Maruti Suzuki, Hero MotoCorp, Power Grid, Adani Ports and Asian Paints were among the gainers, whereas TCS, Bharti Infratel and Bosch were among the losers today.

The India equity market opened higher on Monday on supportive global cues. The domestic market makes a sharp move after Pakistan PM Advisor confirms that India & Pakistan has decided to reduce tensions, as per TV report.

The domestic market extended gains for the second day on optimistic buying ahead of the RBI policy review on Tuesday amid a firming rupee. The market are trading near day’s high led by strong gains among rate-sensitive sectors like auto, financials and realty.

The Nikkei Markit India Manufacturing Purchasing Managers' Index (PMI) a gauge of manufacturing performance settled at 52.1 in September, from 52.6 in August.

Some buying activity is seen in realty, auto, media, capital goods, metal and pharma sectors, while IT is showing weakness on NSE.

A total of 55 stocks registered a fresh 52-week high in trades today, while 15 stocks touched a new 52-week low on the NSE.

The rupee opened higher eight paise at 66.54/$ against US Dollar Monday as against the previous close of 66.62/$.

Asian markets opened mixed on Monday. Nikkei 225 and Hang Seng gained over 1% each, while Shanghai Composite is trading marginally higher.

On the economy front, Fiscal deficit in the first five months of the current fiscal stood at Rs. 4.08trn, which was 76.4% of Budget estimates for 2016-17. India's eight core industries, which have a weight of 37.90 percent in the Index of Industrial Production (IIP), grew by 3.2 percent in August, 2016 as compared to the same monthof the previous year.

The monetary policy committee (MPC) meets today and tomorrow and the new RBI governor will announce the policy post lunch tomorrow. The dollar is firming up while the sterling hit over a month-low after Britain set a March deadline for Brexit.

Market participants are anxiously awaiting the Monetary Policy Review on October 4, the first to be held under the newly appointed RBI Governor Urjit Patel and the first to be decided by a six-member panel.

On the global front, the US non farm payrolls report for September would come on Friday.

India's foreign exchange reserves increased by $1.2 billion to $371 billion in the week ended September 23, the Reserve Bank of India said.

India’s largest-ever spectrum auction kicked off with major telecom operators placing bids worth Rs. 535.31 bn across bands, even as the premium 700Mhz and 900Mhz frequencies did not find any buyer.