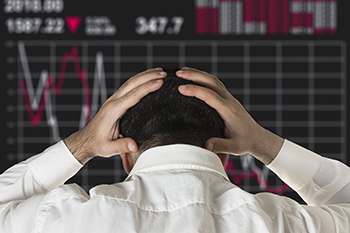 Except for metal and healthcare, all other sectoral indices were under pressure.

The volatility continued on Monday with Sensex nosediving by nearly 725 points and Nifty 50 slipping nearly 245 points in the opening bell. Sensex was pushed off the cliff to the point it was even below 56,400-level. Nifty 50 has even erased 16,800-mark so far today. A broad-based selloff was recorded in the sectoral indices with FMCG, banking, financials, consumer durables and realty stocks being the worst hit. SmallCap stocks witnessed massive correction and were among the top bears in the broader markets.

The domestic equities tracked weak global cues. Investors globally continued to monitor the developments surrounding the omicron Covid variant. The recently found variant has forced many countries worldwide to once again pull the shutters down to contain it.

With the new omicron variant taking a toll across countries, India has geared up with revised guidelines for international travellers. The government has directed rigorous screening and testing to those international travellers that arrive from 'risk' countries like the whole of Europe, South Africa and Brazil. Mandatory testing on arrival, seven days home quarantine for a negative result and also a retest on the eighth day - are some of the key measures that have been adopted by the government.

Except for metal and healthcare, all other sectoral indices were under pressure. On BSE, the FMCG index dived around 1%, while the Bankex, Consumer Durables, Realty, Power, and Finance index fell between 0.5-1.5%. The Metal index outperformed by surging over 1%.

In the broader markets, on BSE, the SmallCap index has plummeted by over 2.5% as well and continued to remain on the selling side.

Benchmarks heavyweight Reliance Industries was the top bull soaring by nearly 3% followed by HCL Tech and Dr Reddy's Lab surging by 2.7% and 2% on Sensex.

Tata Steel and IndusInd Bank gained by 1.6% each, while another major heavyweight TCS advanced over 1.1% on Sensex.

On the bears front, on Sensex, Nestle took lead by plunging 1.6% followed by HDFC and HUL shedding 1.3% and 1%. Maruti Suzuki, Bajaj Auto, Asian Paint, HDFC Bank and ITC dipped between 0.7-1%.

On the global front, Asian markets trading lower with Hong Kong's Hang Seng and Japan's Nikkei 225 witnessing the most bearish tone. Other counterparts were also flat to mildly down. The Taiwan market which has been an outperformer saw more weakness as collateral selling by foreign investors saw outflows. Chinese stocks may be good contrarian bets as macro indicators point to recovery.

Last week, on Friday, US markets logged a huge selloff on the 'Thanksgiving' holiday-shortened session with Dow Jones falling over 900 points while Nasdaq down 350 points. Crude oil falls over 13% for the sharpest fall in over 3-years with bond yields also joining the selloff as yields fall from 1.63 to 1.47%. New South African covid variant causes havoc in global markets even as health authorities suggest only mild fever to be the after effect.