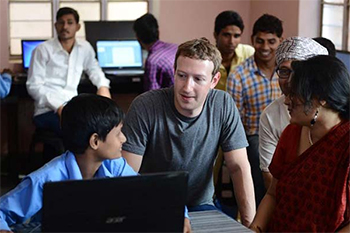 The ‘Free’ of FaceBook’s Basics carries an indiscernible ‘Fee’ – in the form of a closed internet of constricted choices where scheming providers act as despotic custodians of a delectably gullible user community. We must do what we can to prevent these obligatory gatekeepers from becoming overbearing gang lords.

Mark Zuckerberg seems all too keen to conquer the Bottom of Pyramid goldmine called India, in exchange of some first-rate rhetoric smacking of synthetic allegiance. His 'Giving Pledge' track record, the Steve Jobs-inspired ‘temple run’ saga, rich accolades to Taj Mahal or the melodramatic tale of Soybean farmer Aasif Mujawar, he reckoned, were solid material to mesmerize the billion people known for their pastoral roots and rustic ways besides elephants and snake charmers. But a few mutinies, of the million that Naipaul has immortalized in book form, stand in his way, more steadfastly than what he presumed earlier. Unlike Kenya, Nigeria, Indonesia and Bangladesh, India, although a much bigger, spongier cake, is no cakewalk after all. At least, a theatrical run around India Gate won't make Facebook the new Gateway of India.

At least to those who don’t pretend to be asleep, it was never difficult to discern the prohibitive price of the Facebook-led affordable access, the backend machination behind the front-end magnanimity, the plan of transforming the third-world internet into a new-look ZuckNet, the deplorable doublespeak of supporting net neutrality on the one hand and building a ‘cartel of a portal’ on the other, and the disdainful audacity in playing philanthropist and predator in the same breath. No wonder, several Indian entities – from publishing houses, television channels to travel portals – have distanced themselves from the FaceBook club.

Zuckerberg is trying his level best to package his monopoly drive, in conjunction with select partners, as a key enabler of Digital India’s inclusive agenda. That explains the carefully articulated stories of how new dads among poor Indian farmers, courtesy FaceBook, are accessing invaluable child care information online for free, or how Facebook is providing ‘some access’ to democratize the internet which is way better than ‘no access’. But what about compromised user privacy, the strictly Facebook-guided access and new traffic rules seeking to split the information highway into discriminating routes – high speed lanes for club members and bullock cart pathways for non-members? Zuckerberg wants us to accept these as lesser evils of ‘some access.’ As it is, the Facebook brand offers little credibility, given its rich history of playing with the common user’s privacy by default while allowing the founder sister’s to impart designer lessons on digital etiquette and human decency.

Zuckerberg is himself aware of the futility of covering his naked ambition. That explains the about-turns at regular intervals: initially harping on charity and then repurposing it as a commercial endeavor of cost-effective rates, citing a clumsy quick-fix to downplay the glaring HTTPS security issue, declaring his portal open to all developers following allegations of controlled access and restricted use choice and renaming the rather elusive ‘internet.org’ as the more comprehensible ‘Free basics’ to sanctify the undertaking while subtly hinting at the possibilities of “advanced commercials” …the more he’s forced to contemplate in hindsight, the more desperate his foresight appears. Yet, some of his willful supporters have tried hard to put his case into perspective – that he hardly makes any money from India despite the humongous user base and that his inroads into India’s vast hinterland could create potent value chains rooted in a thriving market. Like Colgate was the synonym for toothpaste in India for several years (so was Sintex for water tank and Bisleri for mineral water) and photocopy is still called Xerox, internet for the deprived populace of India would bear the name of FaceBook. But unlike the other cases, this rechristening won't be the result of any demand-side affinity - whether induced by good quality, astute marketing or phenomenal reach - but purely on the foundation of unfair advantage.  God forbid, if the Indian government subscribes to this contrived prognosis, it would amount to one of its biggest blunders sooner than what most would expect. Close on the heels of Facebook are a dozen moguls waiting for their share of the ‘inclusive’ pie. Digital India would then become one of the world’s most lucrative outsourcing deals where India would not be the vendor for a change.

There’s no denying the fact that Net Neutrality, to a large extent, is a utopian concept given the fact that the bigwigs of the global online world have always been blessed with unbelievable access to our sensitive information through hand-in-glove arrangements with ISPs and proprietary algorithms of dubious motives, infallible beyond our wildest imagination. But even as vulnerable end-users of the largely veritable internet, we must do what we can to prevent obligatory gatekeepers from becoming its overbearing Gang lords.

Inventor of the World Wide Web, the revered computer scientist Tim Berners-Lee has put it best, “In the particular case of somebody who's offering ... something which is branded internet, it's not internet, then you just say no. No it isn't free, no it isn't in the public domain, there are other ways of reducing the price of internet connectivity and giving something ... (only) giving people data connectivity to part of the network deliberately, I think, is a step backwards."