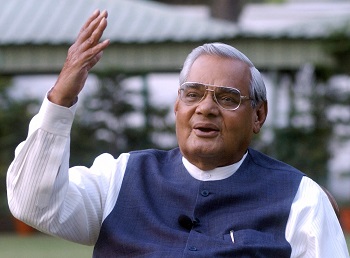 AB Vajpayee and what his flamboyant life teaches us about investing

An accomplished human being, there is a lot to learn from the way he led his life. Moreover, these lessons can be applied to your investing habits as well.

Across time, if people are remembered even after they are gone, it is because of their values and contributions to the world.

Atal Bihari Vajpayee, who passed away after battling health issues on Thursday, August 16, 2018, will always be renowned for his exemplary leadership, his oratory skills, his profound poetry, and his ability to inspire the youth. However, it was his ideals is what he will always be remembered for most. Vajpayee was often referred to as the “most loved” Indian Prime Minister.

As the nation mourns the loss of a beloved leader, abundant stories portraying how the stalwart was a stickler for his values are being recounted. An accomplished human being, there is a lot to learn from the way he led his life. Moreover, these lessons can be applied to your investing habits as well.

Patience: Vajpayee was the first non-Congress PM to hold a full five-year term. This was despite the fact that he had been elected to the post thrice. The first time he got elected, in 1996, he held power for a mere 13 days; the second time, in 1998, for 13 months. However, he did not lose his ideals nor his vision and finally served a full five-year term from 1999-2004. These facts about the three-time PM make for a good lesson on patience.

When it comes to financial markets too, it is important to time your investments right. Remember, value and price are two different things. In Warren Buffet’s words, “Price is what you pay, value is what you get.” Hence, pay the price that you believe is justified, and more importantly, wait for that price.

Resilience: Vajpayee’s 1996 government lasted only 13 days before it was voted off in a no-trust motion. Had he not been resilient at that time, he would not have gone on to serve an impactful full-term three years later.

Like life, the financial markets are also a cycle of ups and downs. Thriving through the odds and holding on to your investments until the storm passes is a lesson we can learn from the visionary leader.

Adaptability & flexibility: The charismatic leader served as the head of external affairs, the co-founder and first President of the Bharatiya Janta Party (BJP), and went on to become one of the most influential PMs India ever had. As a man who donned many hats with ease and an unusual poise, his adaptability and flexibility were prominent not only professionally but also in terms of his approach and ideology. His poems often express messages of fraternity and brotherhood, leaving aside differences and marching forward in the nation’s journey.

We can try and apply the qualities of adaptability and flexibility in our approach to investing as well. As markets go through the inevitable cycle of troughs and peaks, we must be ever-ready to change our strategy accordingly.

Moderation: The brightest saffron star was a known moderate and a truly secular leader. He was the only prominent leader in the party who publicly disapproved the Babri Masjid demolition in 1992. He denied describing the Babri Masjid as a disputed site and not a place of worship and maintained that the mosque should not have been brought down. He avoided jingoism of all sorts and promoted unity across the nation.

Atalji’s example teaches us to adopt a moderate approach while investing in the markets. One should remain balanced and rational and not become too bullish or too bearish about the markets to avoid snap decisions and optimize one’s position.

Decision-making for the greater good: Atalji led quite an eventful term as PM from 1999-2004, dealing with several crises such as the Indian Airlines plane hijack and the 2001 Parliament attack. He was required to take tough decisions such as the Pokhran II nuclear tests, which were eventually for the greater good. Calm and composed as he was, he never avoided making these tough calls.

The same can be applied in the financial markets. Sometimes, you may have to book losses and exit if prices drop below your stop loss. Sounds tough, but some difficult decisions have to be taken to prevent a bigger loss.

As we cope with the irreparable loss of India’s “Anmol Ratna”, we remember him for his extraordinary combination of captivating speeches, warm demeanor, and strong ideals.