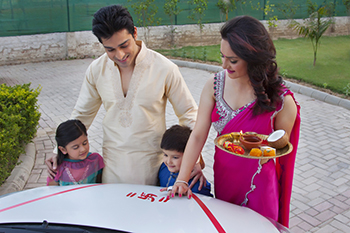 With the festive season of Diwali around the corner, it would be interesting to observe which company leaves a glorious trail behind and which one of them will be left behind. When Maruti Suzuki launched the Eritga in 2012, it targeted those consumers who aspired to own a SUV but were faced with the harsh reality of budget constraints, and could not afford it. At an on-road cost of under Rs 11.00 lakh, the Ertiga hit a sweet spot among the targeted customer base. Following Maruti’s footsteps, Honda too launched its version of a MUV, the Mobilio. Similarly, Mahindra & Mahindra, the undisputed leader in the SUV market in India, also launched multiple vehicles in the same segment, while their erstwhile partner Renault launched their very own “family vehicle”, the Lodgy, to establish themselves in the MUV segment.

With the festive season of Diwali around the corner, it would be interesting to observe which company leaves a glorious trail behind and which one of them will be left behind. Arguably, the coming quarter will give us a fare idea about where the stalwarts of the Indian auto industry stand and their future course in the MUV segment.

For the uninitiated, the auto manufacturers came up with the MUV segment specifically for the Indian Markets, and hence the foray into this class was something new for everyone except for Maruti Suzuki. With its huge market share and the trust of millions of existing customers, the company concentrated on providing a “value for money” product. And they surely did. Since 2012, Maruti has not only dominated the MUV market but also cemented its position as one of the marquee player in this segment. The company is a leading player in other segments too, except the Sports Utility Vehicle (SUV) segment, which is still dominated by the likes of Mahindra & Mahindra and Toyota Kirloskar.

While Maruti launched Vitarra Brezza, S-Cross and the 2017 S-Cross face-lift, the launch of 2016 Ertiga, which also set the sales charts alive, ensured that its competitors were left behind. A long way behind to be specific, as currently the only offering Honda has in the MUV segment is the updated Honda WRV, while Mahindra is struggling with the KUV100 and the TUV300, and Renault has all but given up its pursuit of capturing market share in this segment.

And while Maruti Suzuki and Mahindra & Mahindra have emerged as the only survivors in the MUV segment,, it would be a close run affair in the coming months with respect to who will lead the pack. Maruti topped the MUV segment in June 2017 but this status could come under threat in the coming months. With a robust monsoon in 2017 which will give the rural economy a boost, Mahindra is expected to make a strong comeback in the second half of FY18. Add to this the entrance of the rejuvenated Tata Motors that has already launched the Tata HEXA - an SUV and has recently launched the Tata HEXON, which is aimed directly at the MUV segment. Like Maruti, Tata Motors has its own legacy and like Mahindra the brand has a strong recall among Indians.

Historically, the second half of the year marks an uptrend in discretionary spending which includes buying cars, bikes and other motor vehicles, including trucks and tractors. Maruti with its robust line-up is a clear favourite to benefit from any post monsoon spending. At the same time, GST impact on all products offering of Maruti is limited. The last 2 launches of the company were massive hits - Maruti Suzuki Dzire overtook the industry veteran, Maruti Suzuki Alto, in terms of monthly sales, and Maruti Suzuki Baleno has been consistently delivering a robust 10,000 units per month of sales. With this in mind and the new S-Cross being launched during the current Navratri festival, the company seems poised to have a stellar Q3 and Q4 for FY18 directly impacting the stock price in a positive way.

On the other hand, as 70% of Mahindra & Mahindra’s product are expected to be impacted by the recent increase in GST rates, the company can have a subdued quarter which might impact the bottom-line in a negative way. This could lead to a small correction in the stock price. Although the company has a strong foothold in the tractor and farm vehicle segment, the shift in concentration to Commercial vehicles will impact the sales figures.

Whatever the case maybe, the auto industry’s eagerness capture the MUV segment, and with the upcoming festive season, Indian consumers can look forward to a bevy of products at their disposal.