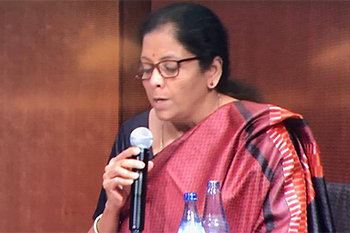 India’s GDP growth in the fourth quarter is down to just 5.8% and the full year GDP is also lower at 6.8%. Hence, the upcoming budget will need to give a big push to the Indian economy.

When it comes to economic growth, Nirmala Sitharaman has already promised to unleash the animal spirits of capitalism. She will have to do that and a lot more. India’s GDP growth in the fourth quarter is down to just 5.8% and the full year GDP is also lower at 6.8%. The IIP for the full year came in at merely 3.6%, mainly from the weakness in manufacturing. It is in this backdrop that the full Union Budget will be presented by the new finance minister.

The upcoming budget needs to give a big push to the Indian economy. Remember, growth is always in the global context and we are in a global trade war situation wherein the IMF and the World Bank have downgraded the global growth rate by 60bps. The challenge for the finance minister, therefore, becomes a lot more complicated. Before we look at the budget expectations, here is a quick look at an interesting chart. (At India’s expected rate of growth of 7.1%, it will be year 2065 by the time India can match up to China’s 2013 GDP in time value adjusted terms). In short, that remains the big challenge for the government. So, what can the Union Budget 2019 do to give a big push to India’s growth?

It is not that disinvestments have not been happening. There have been consistent efforts to sell minority stake in PSU companies from the point of view of resource raising. However, this time, the approach will have to be a lot more structural. For example, the whole concept of the government wanting to retain 51% holding in oil and banking PSUs does not hold water.

The government surely has better things to do, and the need of the hour is to give more management freedom and more of the private sector culture to these companies. Indian PSUs have been consistently losing money, which is a big burden on the exchequer. The budget must make a start towards value explosion. Each PSU is a goldmine of value, provided that the assets are properly monetized and professional management is brought in.

The government can make a start with PSU banks and then take it on to oil companies and others. As Margaret Thatcher loved to put it, “The government has no business to be in business.” That must be the real growth agenda.

Get your oil economics right

This could be the next big reform that the government could be undertaking this budget. With a daily dependence of ~85% on oil imports, India is literally living the modern day PL-480. The government has to really think big on the oil front. There are billions of dollars waiting in the sidelines if the right environment is provided.

It is important to allow flexibility in oil and gas pricing and permit private and public sector oil companies to merge if required. The government has been speaking about creating integrated oil behemoths, but nothing has moved on this front. A huge investment in oil and gas not only creates domestic value but also saves billions of dollars in precious foreign exchange. 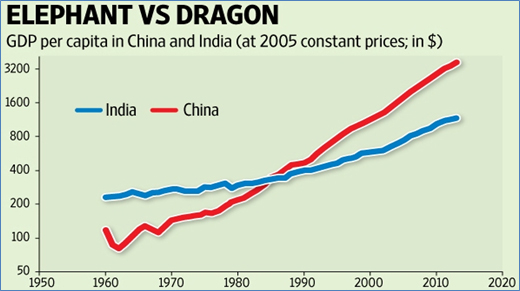 The above chart put out by The Economist captures an interesting dichotomy between the growth models of India and China. China embarked on free markets in 1979 under Deng Xiaoping and one of the first big investments it started to make was in infrastructure. This led to a surge in GDP from the 1980s and also improved the per capita incomes on a large base. The reason was trillions of dollars of investment in infrastructure. According to the World Bank quality infrastructure adds nearly 2% to annual GDP growth. That is exactly where China has scored.

Back in 1997, the Rakesh Mohan Committee had estimated $200bn of investments to bring Indian infrastructure to Asian levels. Now, this figure is up to $2tn, but it is time to bite the bullet. The bigger challenge will be to create the ecosystem. It is important that we have a solid debt market, sharing of risk in infrastructure through exotic instruments, BOT/BOLT, etc., and incentives for capital inflows. If the first budget of Modi 2.0 can even manage some of these, it would set the wheels in motion.