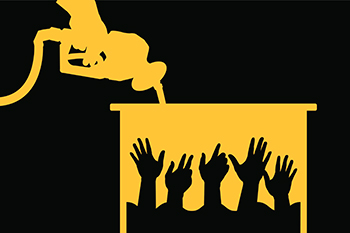 Have you recently switched to public transport from your personal vehicle? Do you wish to go to petrol pumps across the state to power up your car? Are you watchful about switching off your AC in cars? Well, it seems you are not alone. The battle against rising fuel prices has begun!

What’s more, India’s dubious distinctions seem to be rising day by day. The rupee has already been termed the worst performing emerging market currency this year. Now, as per a Reuters report, India is ill-reputably the only major country with a low GDP to have such high petrol prices. This obviously reduces the affordability of petrol.

As of September 21, the price of petrol in Delhi touched a new high Rs.82.32 per litre, while diesel was being sold at Rs 73.87/litre. The worst affected, however, were Mumbaikars, for whom petrol was inching closer to the 90 mark. Currently, petrol stands at Rs89.69/litre, while diesel was at Rs73.87/litre. On Thursday, fuel prices were hiked by 6 paise per litre in metro cities of Delhi, Mumbai and Kolkata. Diesel prices, however, remained unchanged.

Why are fuel prices rising?

Fuel prices are updated based on the process of dynamic fuel pricing, that is, retail selling prices of petrol and diesel are revised daily. This revision relies on the global crude prices and the prevalent currency exchange rate. Dynamic fuel prices ensure that benefits of even the slightest change in international prices is passed down to dealers and in turn consumers.

However, the disadvantage of this system is that rising international crude prices become unfavourable for consumers. Currently, a volatile international scenario has led to a surge in oil prices. The looming US sanctions against Iran, which are set to take effect in November, have pressurized the prices, making it hover near the $80 per barrel mark. However, as OPEC and its allies meet on Sunday in Algeria, it appears unlikely that they will agree to an official increase in crude output to meet the shortfall from Iranian crude. This particularly puts India in a fix as the country is heavily dependent on Iran for its oil needs.

Apart from this, a falling rupee has added to the woes. Though it is showing signs of strengthening against the US dollar, opening at 71.86/$, the rupee has weakened 11.5% in 2018. Here, the country is entangled in a vicious cycle. India relies on oil imports for its fuel requirements and imports about 80% of its needs. Thus, rising oil price leads to a much bigger import bill in dollars, which in turn, weakens the rupee.

Excepting the international scenario, the excise levied by the Centre and VAT charged by the states also contribute to domestic prices. The argument goes that petrol and diesel are considered milch cows to make revenue for the government. Incidentally, the Centre charges about Rs19 per litre of excise on petrol and Rs15 per litre on diesel. Further, the VAT varies according to states, with the lowest seen in the island UT of Andaman and Nicobar, where a 6% tax is charged on both the fuels. On the other hand, Maharashtra charges the highest VAT of 39.12% on petrol, while Telangana levies the highest VAT of 26% on diesel. Thus, overall, the total tax incidence (inclusive of excise and VAT) on petrol touches 45-50%, while that on diesel is 35-40%.

Has the hullabaloo against the government risen?

Yes. The government has been passive, blaming the international scenario for rising crude bills. However, the opposition has been up in arms, slamming the PM Narendra Modi-led government for failing to rein in the prices. They have urged the government to include petro-products within the ambit of GST. However, practically, this doesn’t bode well for the government, especially during election year. Some states like Andhra Pradesh, Rajasthan and West Bengal, meanwhile, have shown respite lowering VAT to ease the burden of the common man.

Thus, as no relief seems to be in sight, the common man is doing what he does best i.e. adapting to the situation. As per some testimonies compiled by Reuters, a cab driver claims he switches off the air conditioner recurrently while traveling, saving “one or two litres” of fuel. A Delhite who supports a large family said that ditching his scooter for a bicycle was the only option. A Guwahati truck driver, meanwhile, crosses the state border to Meghalaya to save money.

Even as citizens bear the brunt, rising crude prices could lead to a cascading effect on food prices and manufactured goods, increasing their burden. With the government refusing to intervene or cut excise, Indians can only hope that the international scenario settles and the rupee recovers to ease the burden on fuel.