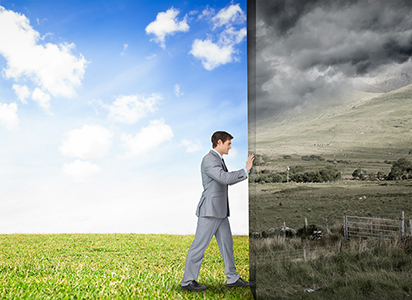 The gloom and bearish bias (both local & global) surrounding Dalal Street gives us a sense of the Darkest Hour. Being a great fan of Christopher Nolan movies, the quote from The Dark Knight that ‘The night is darkest just before dawn’ has stuck with me.

Nifty index has been spiraling down ever since it made a high of 9119 back on 4th March 2015. It has lost more than 20% in a matter of 12 months. Even Index constituents have borne the brunt of this heavy sell-off.

A rationale mind suggests that investors should not get into panic mode. It will help to remember Mr. Warren Buffet’s secret of getting rich which is “Be greedy when others are fearful”

When index gets into freefall zone, sanity suggests that traders should not punt on support levels. Let the market decide where it wants to stabilize. Our historical study of corrections in Indian markets, gives us an interesting observation i.e. Fractal nature of Indian markets.

In the last 10 years, corrective phase in Indian markets tend to last for 15 months (as seen in Jan 2008 - Mar 2009) and also in (November 2010 - January 2012). Generally, after going through this corrective phase, it resumes previous uptrend. Nifty is currently in the 12th month of the corrective phase, which began from March 2015, suggesting that it could struggle for few more months (time-wise), before resuming a major up move. (Range for Nifty is likely to be 6850-7700 for next three months). 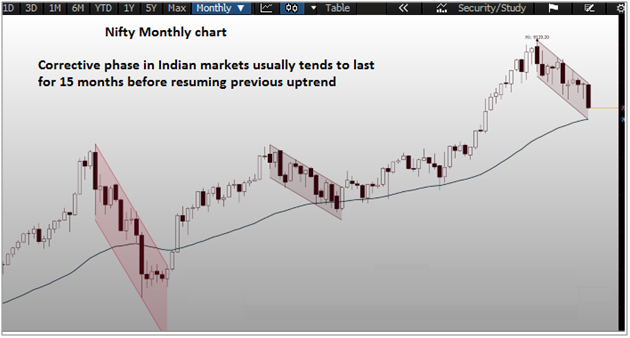 In times like these, what should an investor do? Rather than fearing a fall of 200-300 pts from current levels, the next 2-3 months should be used as a perfect opportunity to build a portfolio. Whenever market hits lower levels, volatility tends to increase and these are not really times to panic.

Market tends to move in cycles. Gann analysis suggests that it is precariously flirting with the lower-range of the orbit (7225). Should it sustain below the same then a decline towards 6889 is not ruled out. However, for the one month, Nifty has been testing support of 7225.

Investors have seen a lot of carnage in the last 12 months and it is worth remembering that good times come to those who wait. Even Christopher Nolan in his block buster movie, “Interstellar” has included a famous line which fits well into the current situation of Dalal Street. “We’ve always defined ourselves by the ability to overcome the impossible. And we count these moments. These moments when we dare to aim higher, to break barriers, to reach for the stars, to make the unknown known.”

The author is Head of Technicals Research at IIFL