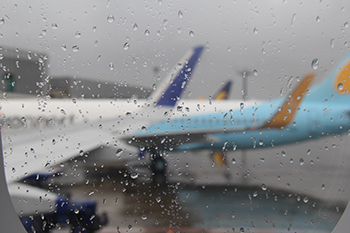 Cyclone Nivar which is called severe by the IMD has lashed with heavy downpours in regions of Tamil Nadu and Puducherry disrupting services and lives there. Transportations were worst hit and airlines have warned their passengers about their travelling. Majority airlines cancelled or rescheduled their flights departing or arriving in the state.

The India Meteorological Department (IMD) late afternoon said, "tThe Cyclonic Storm ‘NIVAR‟ over north coastal Tamilnadu moved northwestwards with a speed of 12 kmph during past six hours and lay centred at 1130 hrs IST of 26th November, 2020 over north interior Tamilnadu near Lat. 12.9°N and Long 79.2°E, about 95 Km south-southwest of Tirupathi and 105 Km west of Chennai."

IMD further added, "The Cyclonic Storm „NIVAR‟ would continue to move northwestwards and weaken into a Deep Depression during next 06 hours and into a depression by subsequent 06 hours."

Earlier today, SpiceJet tweeted saying, "Due to bad weather in Tirupati (TIR), all departures/arrivals stand cancelled for the day."

Tata Group-backed Vistara early morning today said, "Due to the movement of cyclone NIVAR, flights to and from Chennai on November 26, 2020, are impacted. Customers are advised to allow more time for their journey to the airport."

SpiceJet on Wednesday had tweeted saying, "Our flights to and from Chennai stand cancelled till 12:30 PM, 26th November 2020."

Meanwhile, Indigo on November 24 when the cyclone warning escalated, said, "Due to cyclonic movement 'Nivar' flight operations to/from Chennai, Rajahmundry, Tiruchirappalli and Vijayawada are likely to be impacted."

Also, the low-cost carrier, GoAir had tweeted saying, "Due to the movement of cyclone Nivar, flights to/from Chennai may get impacted." Later, the airline also informed about flight reschedule for Chennai airport from 1900 hours of November 25, to 0700 hours of November 26, 2020.