Both, the USDA and the MPOB reports released during the last few months have maintained a bullish stance in terms of demand exceeding supply primarily due to the hyped weather concerns that hog the limelight.

Both, the USDA and the MPOB reports released during the last few months have maintained a bullish stance in terms of demand exceeding supply primarily due to the hyped (reliable in parts, though) weather concerns that hog the limelight. As the international veg oil markets are awaiting bullish triggers to accelerate and capitalize on the ‘Weatherly’ misfortunes, the latest update from the Malaysian Palm Oil Board (MPOB) yet again confirms the depletion of CPO stocks, but below expected levels. Stocks ending June’12 were pegged 5% lower mom at 1.7mn tons vs. 1.79mn tons in May’12 (revised upward from 1.76 in May report). There were noted revisions made to the May’12 exports as well. The current stocks figure stands below the pre report expectations of 1.66-1.68mn tons. This brings the current stocks close to a 14month low, 1.67mn tons was last seen in Apr’11. Since Mar’12, stocks have been steadily falling at a rate of 5% mom as production has been on the rise. In the first place, this could be seen as an encouraging development from the short term price perspective. On the supply side, there is still an element of uncertainty with respect to ‘yield stress’, as production grew at 6.3% mom to 1.47mn tons vs. 1.38mn tons. The same stood lower by 16% on yoy basis, which heightens concerns over the overall production increments for the current year. Completing the first of the half of the calendar year, CPO production totals to 7.8mn tons vs. 8.6mn tons produced during the same period last year. This shows a 9R% slowdown in production on yoy basis and with a late season EL Nino on the cards, overall supply prospects could be threatened in the next couple of months. Therefore, palm prices might stabilize around the current levels of MYR3,050-3,180. On the exports front, the report shows a 8.7% mom increase to 1.53mn tons vs. 1.41mn tons, and is lower by 3.2% yoy. With the Middle East festivities about to begin, the current export growth could presumably the best which the markets could witness. As a voucher for the same, Intertek export estimates show a 13% mom decline to 0.36mn tons for the July1-10 period. On the consumption side, domestic off-take stood lower at 1.63mn tons after hitting close to 2mn tons last month.

Broadly, the MPOB report could be perceived to be neutral to negative for near term as stocks have not bettered the expectations. However, from the medium term view point, palm oil prices could embark on a rally given the lower H1 supplies and receding stock levels. 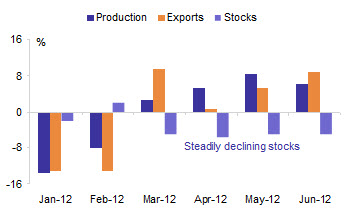