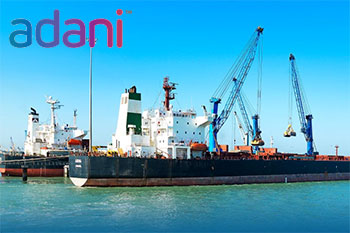 In its regulatory filing today, Adani Ports highlighted that "we would like to inform you that the containers in question were not destined for Mundra Port or any other port in India but were enrouting from Karachi in Pakistan to Shanghai in China."

Adani Ports revealed that on November 18, 2021, a joint Customs and DRI team seized several containers at Mundra Port from a foreign vessel on concerns that they contained undeclared hazardous cargo. While the cargo was listed as Non-Hazardous, the seized containers had Hazard Class 7 markings (which indicate radioactive substances).

Adani Ports said that "although the containers were not destined for Mundra Port or any other port in India but were en route from Karachi in Pakistan to Shanghai in China, the government authorities had them offloaded at Mundra Port for further inspection."

Further, Adani Ports said that the company extended all assistance possible for this operation and thanks to the Customs & DRI personnel for their quick and coordinated action.

"We salute their alert diligence and will continue to fully assist any action that keeps India safe. The Adani Group takes national security very seriously and will not allow it to be compromised in any way," Adani Ports added.