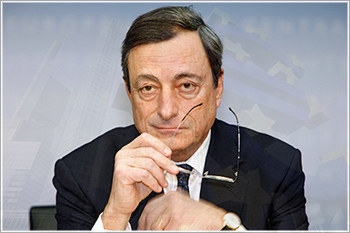 Mario Draghi reaffirmed his confidence in the euro area’s economic expansion in the face of protectionist risks, hours after the European Union and the US stepped back from a potential trade war.

The European Central Bank president confirmed that risks to the region’s upswing are “broadly balanced” even if the uncertainty on global commerce remains “prominent.” He said the expansion is solid and broad-based, blaming a slowdown at the start of the year on the weakening of trade growth and heightened uncertainty.

The assessment comes after European Commission President Jean-Claude Juncker and US President Donald Trump agreed not to pursue new tariffs as they negotiate lower barriers to transatlantic trade. Draghi, who has singled out such barriers as a key risk to the currency bloc, cautiously welcomed that development.

“We took note of this meeting and if one can say something general, it’s a good sign,” he said. “It would be difficult for us to go beyond that because we don’t know the substance.”

The euro rose briefly as the ECB chief said that domestic cost pressures are “strengthening” and “broadening,” and that “uncertainty around the inflation outlook is receding.” He cited high levels of capacity utilization and tight labor markets as reasons.

Earlier on Thursday, the ECB’s Governing Council reiterated its commitment to buy €30bn ($35.2bn) of assets a month until the end of September, slow the pace to €15bn from October, and stop additional purchases at the end of the year.

It also repeated its pledge to keep rates unchanged “at least through the summer of 2019.” That’s a phrasing that some investors wanted to be clarified.

Draghi also said the Governing Council didn’t discuss its reinvestment strategy for maturing debt. He has said previously that “important” decision will be discussed in coming months.