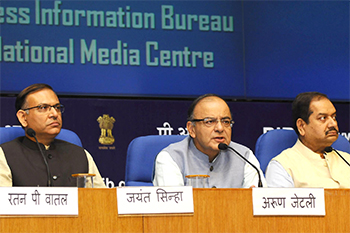 India's latest budget for the 2017 fiscal year contains a number of elements that could be positive from a sovereign rating perspective over the medium term, says Fitch Ratings. However, uncertainties regarding implementation of the reform agenda and meeting targeted revenue growth remain.

Most notably, the budget for the fiscal year ending 31 March 2017 (FY17) underscores the government's continued commitment to gradually broaden the ambitious reform agenda. Further reforms, such as those pertaining to the financial sector, agriculture and liberalisation of the FDI regime were announced in the latest budget, indicating that the government retains its vision of how to structurally improve the economy and create sustainable growth. Fitch maintains that improving the relatively weak business environment through structural reforms that would support investment and real GDP growth is a key factor that would be credit positive.

Fiscal credibility was supported with the budget maintaining the previously communicated deficit target of 3.5% of GDP for FY17, as well as by the central government meeting its deficit target of 3.9% in FY16. There had been uncertainty about how the government would balance stimulating GDP growth through public capital spending and raising public sector wages after the Seventh Pay Commission's recommendations, against ensuring some fiscal consolidation. The reassertion of the original GDP target for the forthcoming year indicates the government's fiscal consolidation aim remains intact.

The government's policy agenda for reform and consolidation are credit positive, but implementation risks remain significant. Many key structural reforms, such as the Goods and Services Tax, still require the passage of legislation through parliament, which is not guaranteed. Furthermore, the 3.5% deficit target is partly based on an acceleration of revenue growth to 14% in FY17 from 9% in FY16. The overall revenue target seems broadly achievable, but depends on economic growth in an uncertain external environment and includes a target for asset sales that may be optimistic. Revenue growth will be supported by a number of tax measures though, including increased excise duties on tobacco and taxes on luxury cars.

The government also announced in the latest budget a plan to review the Fiscal Responsibility and Budget Management Act (FRBM), which was passed in 2003 to improve long-term fiscal stability. This could result in watering down of fiscal discipline, but could also be an opportunity to strengthen and improve fiscal balances over the long run. Public finances remain a key rating weakness for India with both its general government debt and deficit much higher than the median of its 'BBB' peers. General government debt at 69% of GDP is the highest of all 'BBB'-rated sovereigns.