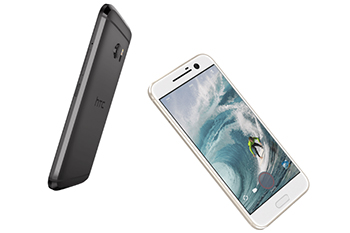 Smartphone market in India crossed the 30 Million unit shipments milestone for the first time ever in a quarter in CY Q3 2016 maintaining its healthy traction with 11 percent Year-on-Year growth.

According to the International Data Corporation's (IDC) Quarterly Mobile Phone Tracker, smartphone shipments clocked 32.3 million units in CY Q3 2016 with 17.5% growth over the previous quarter. “This seasonal spike in third quarter of the year can be attributed to the channel preparation for the festive season, mega online sales and early import of smartphones owing to Chinese holidays in October” says Karthik J, Senior Market Analyst, Client Devices, IDC India.

Online share of smartphone increased to 31.6% with impressive 35% Quarter-on-Quarter (QoQ) growth due to strong performance by key online players primarily from China-based vendors. Also, closing weeks of the quarter witnessed incremental supplies as many vendors were preparing their inventories for the online festival sales in October. Lenovo Group continues to lead online channel followed by Xiaomi. 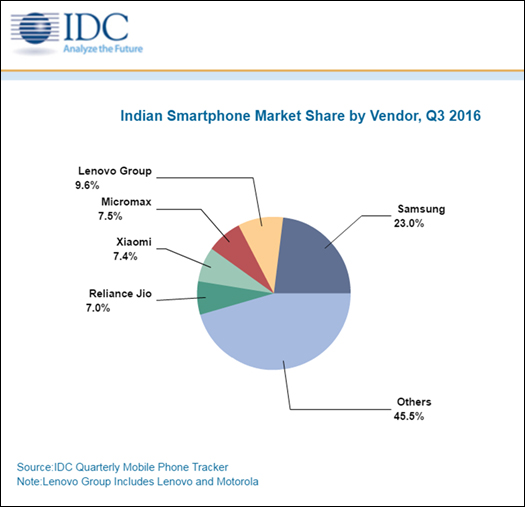 Samsung leads the Indian smartphone market with 23% share with 8% sequential growth and 9.7% growth from the same period last year. Despite the recall of Samsung’s flagship Note 7, multiple new launches across both offline and online channels added onto the its strong portfolio helped vendor to grow at a healthy rate in CY Q3 2016. J2 continues to be a key contributor for Samsung.

Lenovo Group (including Motorola) climbed to second place with 9.6% share of smartphones. Similar to the CY Q3 2015 trend, Lenovo Group’s shipment spiked in CY Q3 2016 with growth of 46.1% over previous quarter. K5 series continues to be lead runner for Lenovo accounting for over 40% of its total volume. Motorola’s volume almost doubled Quarter-on-Quarter driven by newly launched E3 Power and G4 models.

Micromax slips to third position with a 32% decline in smartphone shipments over previous quarter. Vendor is facing tremendous pressure from other local vendors in sub US $ 100 segment and with Chinese players in US $ 100-150.

Xiaomi makes its debut in top 5 as its shipments doubled over previous quarter. With primary focus on online and minimalistic product portfolio, vendor has grown more than 2.5 times over the same period last year. As the vendor plans to expand its footprint in the offline channel, competition is likely to get intense in Indian smartphone market.

Reliance Jio sustains its fifth position in CY Q3 2016 despite a healthy 20.9% growth over previous quarter. With the commercial launch of Reliance Jio Service with attractive introductory offer, the LYF branded smartphones saw a sharp demand with reports of stock outs at some locations. Apart from its entry level Flame series, Water series also contributed to the growth in Q3 2016. 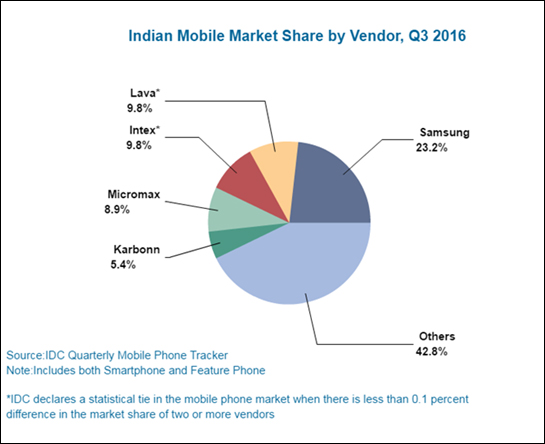 “Mobile vendor ecosystem is going through a multi-dimensional transition. Continuous investment from China based vendors on retail expansion and high decibel marketing has led to disruption in the plans of home-grown vendors to some extent. To remain relevant, home-grown vendors are counting on the feature phone market even though they are facing certain supply issues for a few components” says Jaipal Singh, Market Analyst, Client Devices, IDC India. “Also, vendors are relooking at the channel strategy by getting lower tier distributors on-board, positioning more staff at storefronts and adopting the right mix of products in both online and offline channels” adds Singh.

Migration from feature phone to smartphone has slowed down, helping India based vendors to maintain their dominance in overall mobile market. Though feature phone market is consolidated with few key vendors, it is also witnessing the emergence of new brands. Itel in its second quarter in Indian market has quadrupled its shipments while Zen mobile shipments have more than doubled over the previous quarter.

IDC India Forecast
We expect 2016 to end with a higher single digit annual growth, considering the smartphone performance till CY Q3 2016. “Entry of the new vendors have extended the feature phone supply since past few quarters. However, with expected entry of Jio in the feature phone market, category is expected to grow significantly. This in turn might further slowdown the feature phone to smartphone migration” says Navkendar Singh, Senior Research Manager, IDC India.