A late bout of buying on Thursday rescued the indices which seemed to be more in mood for a breather for most part of the truncated week. 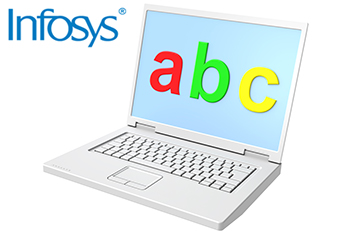 Infosys Ltd has posted results for the fourth quarter ended 31st March, 2014. The net profit for the quarter stood at Rs29.92bn, up 4% QoQ.The net sales stood at Rs128.75bn. The company has announced that the Board of Directors of the Company at its meeting held on April 15, 2014, inter alia, has recommended a final dividend of Rs. 43/- per equity share for the financial ended March 31, 2014. The payment is subject to approval of the shareholders in the ensuing Annual General Meeting of the Company to be held on June 14, 2014. Earnings per share was $0.85 for the quarter ended March 31, 2014

The Audited results for the Quarter ended March 31, 2014

We continue to build a next-gen organization: TCS

Next 12 months will bring more opportunities for growth: TCS 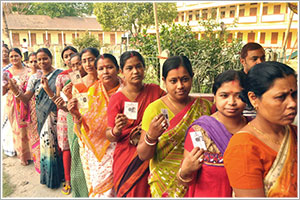 Thursday marked polling in the fifth Phase of Lok Sabha elections covering 121 seats across 12 states from Karnataka to Jammu & Kashmir and including some 11 constituencies in the key state of Uttar Pradesh. Nearly 65% of the eligible electors cast ballot across the 12 states. There was highest turnout of 81.57% recorded in four constituencies in West Bengal, while lowest was recorded in Madhya Pradesh at 54%.   While 80.6% had voted in the four seats in West Bengal in the 2009 general elections. In the state of Karnataka, the voting percentage was 66% and in the 11 seats of Uttar Pradesh, the turnout was 62.52%, up from 2009’s 54.2%. Around 70% votes -- up from the 2009 figure of 44.9% -- were polled in Jammu and Kashmir's Udhampur seat. In Bihar, 56% voting was recorded as compared to 39.3% during 2009 Lok Sabha elections. While Polling in Odisha saw 70% people vote and In Chhattisgarh, 63.44% polling was reported.   Polling in Maharashtra, which has a total of 48 seats, saw a turnout of 61.7%. Polling in the three constituencies of Bangalore – South, Central and North – was more than 50% till 5 pm. Around 62% of the electorate voted in the second phase of polling in six Lok Sabha seats in Jharkhand. In Manipur, the turnout was an impressive 80%. 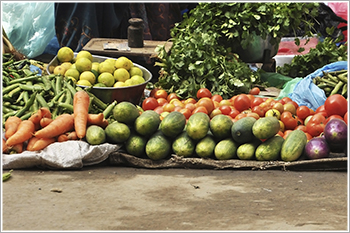 The index for this major group rose by 0.7% to 240.2 (provisional) from 238.6 (provisional) for the previous month. The groups and items which showed variations during the month are as follows:-

Diesel prices may continue to push up core-WPI: ICRA 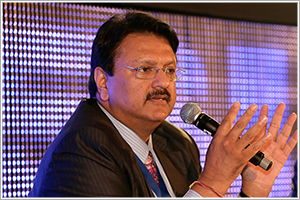 Piramal Enterprises Ltd. announced that it has agreed to acquire an effective 20% equity stake in Shriram Capital Limited ("Shriram Capital" or "Company"), a financial services company, for an aggregate consideration of Rs. 2,014 Cr. Shriram Capital Limited (SCL) is the overarching holding company for the Financial Services and Insurance entities of the Shriram Group, created with the primary objective of optimizing the synergies across the Group’s entities. Shriram Capital’s operating entities, have an overall customer base in excess of 9 Million, more than 53,000 employees across 2,600 offices, net profit of Rs. 800 Cr with Assets Under Management (AUM) in excess of Rs. 78,000 Cr. Piramal had invested Rs. 1,636 Cr in May last year to acquire ~9.9% equity in Shriram Transport Finance Company Limited, one of the listed NBFCs forming part of the Shriram Group...Read More 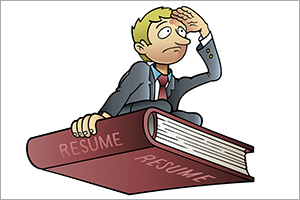 Stress is an enemy of achieving a balanced sense of well-being: Survey 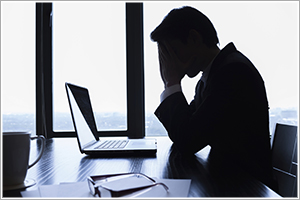 Forget fame and fortune, well-being is topping the to-do lists for global travelers in our "always-on" culture, according to a global well-being survey conducted by Westin Hotels & Resorts. A whopping 70% of Indian survey respondents consider maintaining a balanced sense of well-being as a status symbol, outranking professional accomplishment (51%), being rich and famous (42%) and a healthy relationship (41%). How important is well-being in today’s stress-ridden society? More than 77% respondents believe that work-related stress can cloud their judgment for everyday life. 39% would participate in a digital detox by limiting technology access (computer, tablet, phone etc.), while one in every three respondents would turn down a pay raise to improve their overall well-being! A quarter of the respondents would even be willing to give up alcohol to achieve a balanced sense of well-being. The Westin brand’s global well-being study was unveiled on the heels of the launch of the Westin Well-Being Movement, a multi-million dollar initiative designed to enhance the well-being of guests and associates around the world. The survey sample consisted of more than 6,000 frequent global travelers from the U.S., China, Mexico, India and the United Arab Emirates (UAE), and includes insights from 1534 respondents from India...Read More

How we age and to cut back those years? 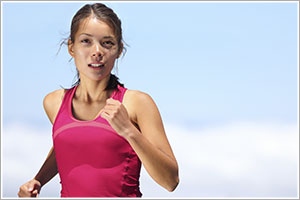 Ageing is an inexorable process that cannot be stopped. But whether you look your age or ten years younger is something on which you do exercise control on. The skin starts showing signs of ageing from 25-30 years. These changes get more pronounced after 30-35 years of age. The first sign of ageing is change in texture and hydration level of the skin. The skin gets drier, patchy and the skin radiance reduces. We feel that we are looking dull, darker and are not glowing the way we used to! By 35 years of age fine lines start developing around the eyes called crow’s feet .By 40 frown lines, forehead wrinkles set in. By 50-60 years the laugh lines get deeper and neck wrinkles appear and skin laxity sets in. Some people develop age spots patchy skin and pigmentation. Due to drop in metabolism and hormonal imbalances there is gain in weight which is hard to lose. The areas like abdomen, upper arms, thighs also sag and lose there tone. Cellulite and worsening of stretchmarks are also common issues of ageing women. I am sure by the time you finish reading this paragraph many of you would have entered throes of depression. Please do not despair because the good news is that ageing can be retarded, prevented and reversed...Read More

Regular exercise can speed recovery for stroke survivors and may reduce their risk of having another stroke, according to a leading academic. The advice from an expert in stroke medicine contrasts with commonly held fears that exercise may trigger a further stroke. People who have been physically active before their stroke are more likely to make a good recovery but less is known about how exercise can affect recovery after a stroke. Professor Gillian Mead has been researching the benefits of exercise on stroke recovery for more than 10 years. She will be speaking about her research at a public event this week as part of the Edinburgh International Science Festival.

Her findings reveal that a structured physical training plan – including aerobic, strength and balance training – can help stroke survivors to become more mobile, improve their balance and reduce their disability. Professor Mead is currently investigating whether breaking up long periods of sitting or lying – so-called ‘sedentary’ behaviour – with short periods of movement might help to bring down the risk of having another stroke. One in six people in Scotland will have a stroke in their lifetime and survivors can be left with varying degrees of disability. More than half of all people who survive a stroke require support to live independently. Doctors in Edinburgh are now working with professional fitness trainers to integrate specialised exercise programs into mainstream care for stroke patients...Read More 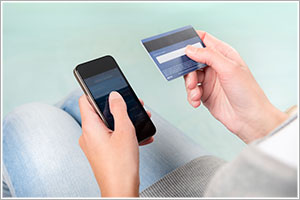 Over 47% of Indian men who participated in a survey believed that their spending has increased ever since they have started using their mobiles for purchases, like shopping, travel, ticketing etc. Over 2500 respondents participated in an online survey held by ING Vysya Bank in liaison with ING International Survey (IIS), London. The study aimed to capture emerging consumer insights and behavioral trends in the run up to the launch of the new and improved ING Vysya Bank mobile banking application. While the majority of the male respondents said mobile drove them to shop more, they also felt mobile banking helped them have better control over their money. 81.75% of male participants said they feel more in control of their money after they started using mobile banking. Also 42% of respondents said they use mobile banking on the move as against home (31%) or office (20%). The survey, juxtaposed with ING International Survey findings on mobile banking consumer behavior, threw out interesting findings on how Indians compare to European consumers. In a first-of-its-kind such comparative study, over 81% of respondents felt that they are in control of their money as against the European average of 66%. The European average comprised of 12 European countries covering a total sample size of 11724 respondents...Read More 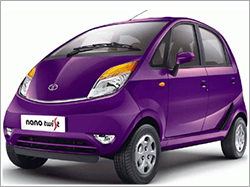 Circa 2008 was a watershed for the Indian car industry – Tata Motors may well say that it was a watershed for the global auto industry. Ratan Tata’s dream project took the shape of the Tata Nano and it was announced to the whole wide world as the "world’s cheapest car". But that tag has haunted Tata Motors – while the noble intention was to provide affordability to the masses for safer mobility, the "cheap" connotation meant that after the initial euphoria of bookings, the sales curve has only shown a downward spiral. Adding to the misery were the unfortunate incidents of the engine catching fire and the resultant media hype around it (fueled by competitors or not is a different question altogether), and the negative feedback on a few sore issues like engine noise, lack of features et al.

Since then, Tata Motors has been upgrading the Nano periodically with various features in a desperate attempt to jumpstart sales and make it more customer-friendly. At the same time, they have taken efforts to ensure that the price doesn’t balloon all of a sudden to make the car suddenly unaffordable to its core audience. "Cheap" has a different dictionary meaning too, and a steep price rise is a put-off in a value-conscious country like India already reeling under high inflation (alongwith the economic slowdown, high inflation has added further pressure on car sales). But a lot of us who are fans of the Nano’s looks and basic instinct want more aggression from Tata Motors, and feel it has possibly wasted a lifetime’s opportunity with its ‘lackadaisical’ attitude towards car development and design – the volume numbers tell their own story, but that’s another story altogether. Be that as it may, the reason I am writing this review is due to the addition of the most significant feature to the Nano in all these years...Read More

Click below for the India Infoline Weekly Newsletter:
https://content.indiainfoline.com/Newsletter/wkly821.html