Violence against women: Making sense of a crisis

Violence against women not only affects the survivors' mental and physical well-being, but it also carries staggering social and economic costs. Whether in congested public spaces in one of Asia’s megacities, in remote rural locations or in the all-too-often false comfort and security of a home, violence and abuse affect women from all backgrounds and avenues of life.

The scale of the problem across Asia and the Pacific cannot be underestimated. Partners for Prevention, a United Nations program devoted to preventing violence against women in Asia and Pacific, conducted a survey of around 10,000 men in six Asian countries - Bangladesh, Cambodia, the People's Republic of China, Indonesia, Papua New Guinea and Sri Lanka - on this issue. While the study is not representative of Asia and the Pacific as a whole and prevalence of violence varies greatly across countries, regions and localities, the overall scale of this scourge is reported to be quite simply staggering. 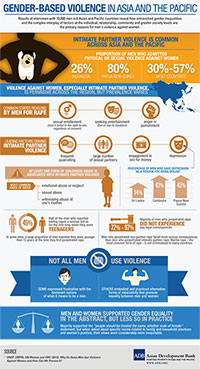 Men who reported ever having perpetrated physical and/or sexual intimate partner violence in their lifetime varied from 26% in rural Indonesia to 80% in Bouganville, Papua New Guinea. In most of the survey’s sites, the level recorded was between 30 and 57%. One of the survey's most shocking findings was that half the number of men who reported having raped a woman did so for the first time when they were teenagers.

Emotional violence within an intimate relationship is also widespread, as are episodes of men taking advantage of women from an economic point of view, e.g., taking their salaries from them. For example, 16% of men in urban Bangladesh reported perpetrating abusive acts against women that involved a financial gain for them. Clearly, the problem is dire and the need for solutions urgent. Yet, not much can be done unless the roots of the problem are understood.

“The aim of any action should be to address these factors to stop violence before it takes place,” says James Lang of Partners for Prevention.

So why do some men use violence against women and how can it be prevented?

Making sense of a crisis

Though a large majority of respondents to the survey reported a belief in the abstract idea of equality between men and women, at the same time men’s violence against women was clearly found to be largely driven by factors related to gender inequality and power within the family and society at large.

“In an environment where manhood is often associated with traits like toughness and dominance, violence is often used as a way to reassert power,” comments Lang.

Childhood experiences and the witnessing of harmful forms of masculinity also appear to play a crucial role.

Perhaps surprisingly, although alcohol is often assumed to be a common trigger for violence, it was the least common response given by men when asked about their possible reasons for raping. More complex cultural factors appear to be at play.

“The survey shows that men’s use of violence against women is also associated with a complex interplay of factors at the individual, relationship, community and greater society levels,” explains Lang.

Overall, the study findings suggest that underlying gender inequalities and power imbalance between women and men are the foundational causes of violence against women.

The cost of violence

Violence against women is a gross violation of their human rights, harming them physically and psychologically. “Gender-based violence prevents women from exercising their rights, compromises their health, restricts them from becoming fully productive and realizing their full social and economic potential,” said ADB Vice-President Stephen P. Groff at a 2012 ADB eminent speaker's forum featuring Dame Justice Sylvia Cartwright talking about the economic and social costs of gender-based violence to development.

Yet, violence not only costs women their mental and physical well-being, but it also undermines economic growth, as its social and economic costs are enormous and stall all other development efforts. Violence against women reduces human capital, decreases productivity, hampers progress towards the Millennium Development Goals and slows down poverty reduction. In other words, it is a critical development issue.

In 1998, Filipino economist Ermi Amore Figueroa Yap estimated the cost of treating survivors of violence against women at 6 billion Philippine pesos. In some developed countries, the economic cost of violence has been estimated at between 5% to 10% of Gross Domestic Product. This is evidence of the fact that the costs of not addressing violence against women are significant for the survivors, society, and the economy as a whole.

In several of its projects, ADB tackled different aspects of violence against women. In Bangladesh, for example, a primary health care project assisted female survivors of violence through one-stop shop centers that provided psychological, physical, and legal assistance.

Increasingly, many ADB urban transport projects are designed with violence prevention features such as effective lighting in and around rail, bus, metro stations, separate and safe waiting areas, separate carriages for females, panic buttons in trains and sometimes even separate queues for men and women.

In Nepal, police from women's police cells, prosecutors, and advocates were trained on women's legal rights and how to more effectively deal with violence against women.

In the Philippines, the justice sector reform program trained the Philippine National Police on handling cases of violence against women.

Gender equality and women’s empowerment are essential for meeting Asia’s aspirations of inclusive and sustainable development. Stopping violence against women is a crucial step toward the equality that so many people in the region are working hard to achieve.