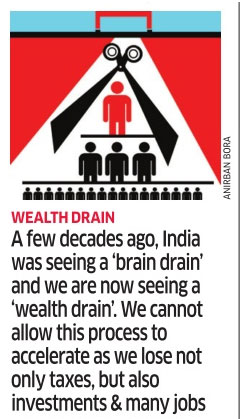 Budget 2016: Why an anti-rich Budget wouldn’t be a pro-poor one

"There are murmurs in the market that the Budget stance will be pro-poor and antirich. A few such provisions being talked about are dilution of long-term capital gains tax exemption, increase in dividend distribution tax, increase in corporate tax rate and further increase in the surcharge rate on the high income group,” said Nirmal Jain, Chairman, IIFL Group.

There are murmurs in the market that the Budget stance will be pro-poor and antirich. A few such provisions being talked about are dilution of long-term capital gains tax exemption, increase in dividend distribution tax, increase in corporate tax rate and further increase in the surcharge rate on the high income group.

In principle nobody can gainsay the sovereign’s responsibility to do everything possible for uplifting the poor and downtrodden. At the same time, it cannot ignore the risk that policies that are not well thought through could result in outcomes that may be opposite to what they are intended for.

We already have a dividend distribution tax (DDT) of 20.3576 per cent. The shareholders, whether large or small are owners of the company who have paid tax on profits at the rate of 34.608 per cent. DDT is a tax on profits on which tax is already paid. If, for instance, Azim Premji were to own his business as a sole proprietor as a partnership firm, effective tax on profit withdrawn will be 34 per cent but as a shareholder of Wipro, effective tax rate on profit withdrawn is 48 per cent. Our policy framework should encourage an entrepreneur like him who has built a large profitable business, to share wealth with public shareholders.

If the government wants to augment tax collections from the super-rich or corporates, a simple and a fair way is to increase the maximum marginal tax rate. The structure to collect taxes in a multiple, overlapping and roundabout way, is an attempt to make tax rates look lower optically, but in reality they make the tax structure complex, cumbersome and convoluted. Therefore all surcharges, cess, should be merged into one tax rate – a simple step to simplify tax regime.

There is merit in removal of several exemptions, MAT benefits and plugging loopholes which reduce effective tax rate for some corporates. The finance minister’s plan to reduce corporate tax to 25 per cent and remove exemptions is the way forward. Investors and businessmen will be enthused if government moves towards such a regime resolutely.

Let us discuss another market sensitive issue: the exemption on long-term capital gains (LTCG) tax and the lower tax rate on short-term capital gains. It is well known that any gains made on shares listed in the stock exchange are exempt from tax if the shares are held for more than one year; and the gains made on shares held for less than a year are taxed at a lower rate. In lieu of the lower tax rates/exemption, the government levied the Securities Transaction Tax (STT). In fact, this has proved to be a simple and efficient way to collect tax from investors.

A change in capital gains tax regulations, if at all it is done, must come alongwith removal of STT. More importantly, stock market sentiment at this point in time is quite fragile. A one-sided adverse change in capital gains tax regulations can cause a sharp sell-off and bearish sentiment. It will also raise the cost of equity at a point when companies and banks and corporates need to raise fresh equity to fund growth or repair their balance sheets. Without a revival in the capex cycle, growth rates cannot accelerate. During the 2004-08 high growth phase when India’s GDP grew close to 9 per cent CAGR, capital investment grew at almost 16 per cent CAGR; and one of the key factors that helped drive this growth was a buoyant stock market and easy access to risk capital.

India predominantly lives in villages and subsists on agriculture. Since independence, every government and every Budget speech has focused on rural development and agricultural growth. Yet, in relative terms, the rural and agriculture worker is far poorer today than his urban or industrial counterpart than at the time of independence. It is time for our policymakers to take a step back and think what is going wrong.

The answer is simple. We as a nation have failed, on one hand, to facilitate flow of adequate capital to rural India for modernising agriculture, improving productivity and promoting ancillary industries and on the other hand, we have failed to upgrade urban infrastructure to encourage migration of rural workforce. We have frittered away tax payers’ money in doling out alms in the form of farm, fertiliser, and food subsidies, winning the instant popular vote and losing the opportunity for sustained better lives for rural folks.

In a globalised world (unlike the 70s/80s), there is yet another risk. We compete with the world for simple and low tax rates. In the past few years, several entrepreneurs have been flipping their holding companies outside India, typically in Singapore and saving a huge amount of tax. Many rich and wealthy people are taking their businesses and assets outside, getting their kids educated abroad and settling them there. A few decades ago, India was seeing a ‘brain drain’ and we are now seeing a ‘wealth drain’. We cannot allow this process to accelerate as we lose not only taxes but also investments, share of wealth creation and many jobs.

The above article was published in The Economic Times on February 26, 2016