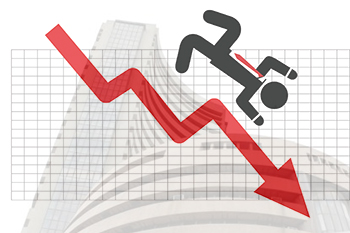 Amid several global and domestic headwinds, the Sensex lost a whopping 770 points, and the Nifty shed 225 points on Tuesday. Despite the Government announcing revival measures for certain ailing sectors of the economy, the Indian markets cracked over 2% as sentiment continued to remain negative.

Here are the top 4 factors that dragged the markets today:

Dismal macro data: On Friday, MOSPI released its GDP estimates for the Apr-Jun’19 quarter. India’s GDP growth rose to its slowest pace in 25 quarters at 5% in the said quarter. Further, eight core sectors growth slowed to 2.1% in July 2019 vs. 7.3% yoy. The Index of Eight Core Industries had grown at just 0.7% in June 2019. In addition, PMI data showed that India’s manufacturing sector activity declined to its 15-month low in Aug’19. These figures denote the depth of the much prevalent slump in the economy.

Continued decline in Auto sales: D-street also factored in the slowdown automakers have been facing this year. Biggies such as Tata Motors saw a double-digit yoy decline in their August sales, even as automakers cut production to align it with demand and laid off workers to survive the testing times. Perhaps, one of the worst slowdowns the sector has faced so far is not expected to disappear overnight as it is a result of multiple headwinds viz. tight liquidity, low demand, and stricter emission norms.

FPI withdrawal and weak INR: Even as the Government rolled back the draconian FPI surcharge last week, August witnessed a net outflow of Rs5,920cr from the Indian capital markets by foreign investors. The rupee also tanked to a 2019 record low, sliding 96 paise to 72.37/$. Both global and domestic factors are to be blamed for the plunge.

Global uncertainty: Protests in Hong Kong and the raging trade war between the world’s two largest economies show no signs of relenting, with markets gyrating around every development regarding these events. This prolonged environment of uncertainty has sparked major risk aversion among market participants, who resort to safe havens such as gold in times like these, triggering a sell-off in equities.