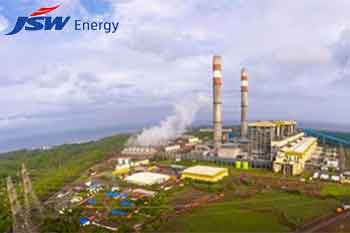 JSW Energy Limited (“JSW Energy or “the Company”) has signed a contract with Senvion India (‘Senvion’), a leading manufacturer of wind turbines, for procurement of 591 MW of onshore wind turbines for the company’s under-construction pipeline of renewable energy projects.

The supply of the turbines from Senvion will start by the second quarter of CY2022. Furthermore, the turbines will produce enough green energy to meet the annual electricity requirements of more than 450,000 households in the country.

Prashant Jain, Joint Managing Director and CEO of JSW Energy, said: “We are proud to partner with Senvion India, a high-tech industrial company, to contribute to India’s renewable energy goals. Our company has set a target to reach 20 GW of power generation capacity by 2030, by when the share of renewables in our portfolio will increase to 85%. The ongoing projects are our first large scale wind power projects and we look forward to working with Senvion to achieve our completion targets.”


Amit Kansal, MD & CEO, of Senvion India, said, "It is a very satisfying contract win from JSW Energy and Senvion is very thankful for the trust the JSW management has put in Senvion’ solutions and team. The success of such a project depends on pre-engineering and optimization which helps not only in winning but in execution later. The two teams are now working relentlessly to meet the commissioning timelines and to build a world-class project. Senvion is fully committed to delivering world-class technology an significantly contribute towards the vision of Indian Government to achieve 450GW of installed renewable power in the country by 2030.’

JSW Energy has set an ambitious target for a 50% reduction in carbon footprint by 2030 and achieving Carbon Neutrality by 2050 by transitioning towards renewable energy.

With the commissioning of these projects, the Company’s total generation capacity will increase to ~7 GW, with renewable energy contributing more than 50%.

As a signatory to the Paris Climate accords, India has embarked on an ambitious target of achieving 450 GW of renewable energy by 2030. JSW Energy Limited has joined the global movement of leading companies that are aligning their business with the ambitious aim of the Paris Agreement, to limit global temperature rise to 1.5°C above preindustrial levels and reach net-zero value chain emissions by no later than 2050.