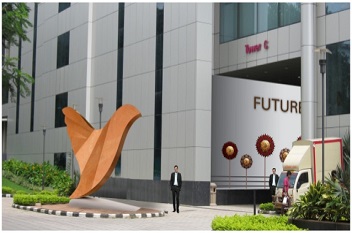 Kishore Biyani-backed Future Group has faced a blow in arbitration notice filed by Jeff Bezos-led Amazon under Singapore International Arbitration Centre ("SIAC"). In the latest proceedings, Amazon has asked for Rs1,431cr plus interest as damages. Further, the SIAC has asked transaction with Reliance Retail to be put on hold for now.

On Sensex, Future Supply Chain Solutions ends at Rs86.05 per piece flat compared to the previous closing. While Future Retail closed at Rs70.90 per piece below 0.35%.

However, Future Enterprises completed at Rs9.36 per piece above 0.21%.

On the other hand, RIL stock ended at Rs1877.30 per piece down Rs177.05 or 8.62%. Apart from the setback in Future Group and Reliance Retail deal, RIL's stock also tumbled after the company announced downside in September 2020 (Q2FY21) earning on a year-on-year basis.

Amazon has issued a notice of arbitration against Future Retail (FRL) and other FRL promoter group persons following the SIAC Rules for alleged violation of the provisions of the shareholders agreements.

FRL in its regulatory filing said,  further, as per SIAC Rules Amazon has filed an application seeking interim relief, inter alia, injuncting the Respondents from giving effect to the Composite Scheme of Arrangement.

FRL on November 01, said, as an alternative to its claim and injunctive reliefs against the scheme, Amazon has sought for damages amounting to Rs1,431cr alongwith interest being the amount invested by Amazon into Future Coupons Pvt. Ltd.

FRL states that it may be noted that even if such claim is approved by the Arbitration or at any other judicial forum, the same would be payable by Promoters and there would not be any financial impact either on the FRL or the Company.

Further, the  Emergency Arbitrator, under the SIAC Rules, has directed Future Group to put its transaction with Mukesh Ambani’s Reliance Retail on hold for now.

"As per information received, FRL is in process of initiating appropriate proceeding to protect its rights and seek necessary reliefs against in relation to the interim award which is not enforceable under Indian law," FRLadded.

On Amazon's notice, FRL said, this contention raised by Amazon is entirely misconceived. In fact, if the two separate agreements were treated as a single integrated transaction by which Amazon obtained an interest in and rights against FRL,then in 2019, when the agreements were executed there would have been a change in control of FRL in favour of Amazon, requiring it to make an open offer to FRL’s public shareholders in terms of the SEBI (Substantial Acquisition of Shares and Takeovers) Regulations, 2011. No such open offer was made, thereby suggesting that there was no intent of Amazon to consider the two Agreements as a single integrated transaction at that point of time.

"Though this issue was raised by FRL before the Emergency Arbitrator, the EA Order appears to overlook this illegality by stating that Amazon has not attempted to assert control over FRL without appreciating that once the two agreements are conflated in law the protective, special and material rights granted thereunder would constitute a conferral of “control” in favour of Amazon. Given that the EA Order is premised on violation of SEBI Regulations it cannot and ought not to be accorded any sanctity by SEBI, NSE and BSE," FRL said.

Also, FRL has asked BSE and NSE ought not to take cognizance of Amazon’s letter or the EA Order.