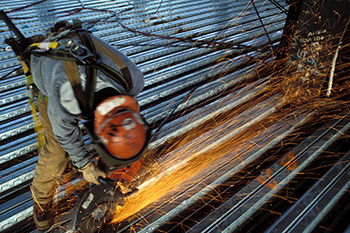 The Nikkei India Manufacturing Purchasing Managers’ Index (PMI) rose from 51 to 51.6 in April. This was indicative of a faster improvement in the health of India’s manufacturing economy than in the prior month but pointed to a modest upturn that was weaker than the series trend.

Manufacturing conditions improved for the ninth consecutive month in April, supported by faster expansions in output and new orders. Greater production requirements stimulated job creation and encouraged companies to engage in input buying. On the price front, inflationary pressures continued to ease in April, with the softest increases for input costs and output charges reported since September 2017 and July 2017 respectively.

A key factor contributing to the upward movement in the headline PMI index was a solid rise in output. Output growth was solid and picked-up from March’s five-month low, but remained slightly below the average for the current nine-month period of expansion. According to panellists, favorable demand conditions supported the latest upturn. Greater production in consumption and intermediate groups outweighed the decline in investment goods.

New business rose for the sixth consecutive month. Although modest, the rate of expansion accelerated since March. Panellists reported that stronger market demand led to greater client wins. As was the case with output, growth was registered in consumption and intermediate goods. New orders from overseas rose for the sixth successive month in April, albeit only marginally. Moreover, the rate of expansion moderated to the weakest since November 2017.

Finally, business sentiment was at the strongest level seen since the implementation of the Goods and Services Tax in July 2017. Optimism reflected expectations that new business and demand conditions will improve over the coming 12 months, according to panellists.

Commenting on the Indian Manufacturing PMI survey data, Aashna Dodhia, Economist at IHS Markit and author of the report said, “The Indian manufacturing economy started the quarter on a slightly stronger footing as growth picked-up from March’s five-month low, buoyed by stronger demand conditions. “Putting the PMI data under a magnifying glass, consumer goods were again the bright spot, with output growth being the fastest among all the three market groups. Meanwhile, investment goods were the weakest performing category as both production and new orders declined during April. “Encouragingly, PMI data highlighted inflationary pressures moderated for the second month in a row, with input cost and output charge inflation at the weakest since September 2017 and July 2017 respectively. “Business sentiment was at the strongest level seen since the implementation of the Goods and Services Tax in July 2017, driven by expectations that underlying demand will improve further over the next 12 months, and subsequently firms reported a renewed increase in job recruitment.”