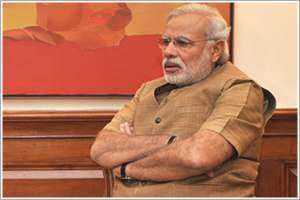 The Nepal President congratulated the Prime Minister for having won the hearts of the people of Nepal during his two-day visit.

The Nepal President congratulated the Prime Minister for having won the hearts of the people of Nepal during his two-day visit.

He also congratulated the Prime Minister on his recent election victory, saying there was now new hope, even among neighbouring countries of India. He said there was expectation that the pace of development would increase not just in India, but in all countries of the SAARC region.

President Ram Baran Yadav also complimented the Prime Minister for his speech in the Constituent Assembly, as well as the speech during the banquet hosted by the Prime Minister of Nepal, Shri Sushil Koirala. He said both speeches were extra-ordinary, and signify a new era of friendship between India and Nepal.

The Nepal President said that Prime Minister Narendra Modi had won the hearts of the people of Nepal. With this visit, there is new hope of development in Nepal, he added. He said the Nepal Government is hopeful of India`s assistance for the country`s development.

President Yadav said Nepal is a sovereign democratic nation, which is now writing its own Constitution.

Prime Minister Narendra Modi said he was overwhelmed by the love and affection that he had received from the people of Nepal in the last two days. He asserted that India respected the sovereignty of Nepal, and was keen to assist in its development.

Noting that India is a federal democratic republic, and Nepal is also now committed to be one, he said the Constitution of Nepal would send a new message to the world, to lay down arms and move forward in a peaceful, democratic manner.

The Prime Minister thanked the people of Nepal for the love they had given him during the visit.

PMO to review asset-monetization drive to accelerate it

All fertilizers with subsidies to be sold under the same name, "Bharat"