SETTING UP THE ENERGY CONTEXT

The 11th Five Year Plan of the Government of India states,

Availability and access to energy are considered as catalysts for economic growth. The envisaged growth of the economy at 9% in the Eleventh Plan cannot be achieved without a commensurate increase in the availability of energy.

This statement above gives a clear idea about the vision of the Government of India towards its energy policy. India is currently the third largest producer of electricity globally, accounting for 4.8% of global share. However, it still is a power-deficit state. The power outages in 2012, on two consecutive days of 30th and 31st July, proved beyond doubt the energy deficiency of a nation. The estimated number of people affected were 620 million, which is close to 9% of the world population. Recently, there was a huge power crisis in the national capital. As per the estimates by Central Electricity Authority (CEA), average month wise power deficit was 8.7% during year 2012-13 (Central Electricity Authority, 2013). In this scenario, it only seems logical that the current modes of production of power are grossly insufficient and there is an urgent need to shift to alternate sources of energy.

However, this does not seem to be the case. The monthly All India Installed Generation Capacity Report indicates that Non-Renewable Energy (NRE) power plants constitute about 87.55% of the installed capacity, while the Renewable Energy (RE) power plants constitute the rest. Given the immense need of power production in India, these figures tell a sorry tale. The growth in the need for power and rise in demand can be attributed to some of the factors listed below.

The above mentioned factors impress heavily upon the fact that major initiatives are needed in the field of RE and sustainable development of power sector. The key drivers of renewable energy in India can be attributed to energy security concerns, climate change, increasing cost competitiveness of RE technology, low carbon growth strategy, foreign investment policy, and huge untapped potential. The figure below gives the source wise installed capacity of Grid Interactive RE in India, as on June 2013.

Fig 1: Installed capacity of Grid Interactive RE in India, June 2013. 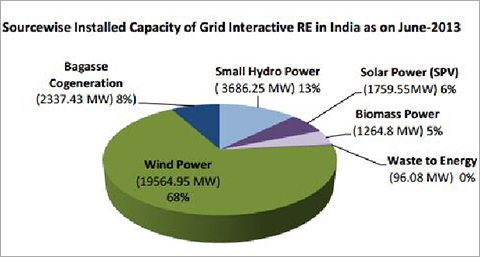 This article takes a look at two major sources of RE, Wind and Solar, and how they are positioned in India. It also highlights the latest trends, further development opportunities, and proposed plans of the new government at the center.

India has the fifth largest installed wind power capacity in the world at 20226 MW. As per the report of Centre for Wind Energy Technology (C-WET), the state-wise wind installed capacity up to January 2014, Tamil Nadu tops the list of the state with 7251 MW followed by Maharashtra and Gujarat. The 12th Five Year Plan proposed increment in grid-interactive renewable power is around 15,000 MW from wind energy alone [3]. If past trends are to be observed, during the 10th Year Plan, the target was set at 1500 MW while the actual installation was 5427 MW. Similarly, during the 11th Year Plan, the target was set for 9,000 MW while the actual installation crossed 10,200 MW. If this trend remains positive, we could see a good growth in the grid-interactive wind power. In another report of C-WET, installable wind power potential at 80m level in India is reassessed as 102788 MW compared to the earlier estimated 49130 MW at 50 m hub height. Further, this potential could change as per the real land availability in the windy area of each state. The increased wind power potential at 80m hub height provides more opportunities for the manufacturers to invest in advanced manufacturing techniques.

Due to the natural advantage of a large coastline that India possess, off-shore wind power development has been in the forefront. Leading in this is the state of Tamil Nadu, Gujarat and Maharashtra. A 2012 study by Scottish Development International showed Indias potential to establish two 1 GW wind farms off the coastlines of Rameshwaram and Kanyakumari in Tamil Nadu. The draft report of National Policy for Offshore Wind Energy in India also identifies the maritime zones where off-shore wind farms can be built. There are also plans to to establish a National Offshore Wind Energy Authority (NOWA), which would act as a single window clearance system for the necessary clearances.

The Electricity Act (EA), 2003 was the first concrete step by the Government of India to promote renewable sources of energy. Currently, the State Electricity Regulatory Commission (SERC) determines the tariff of all renewable energy in the state, while the Distribution Companies (DISCOMs) ensure transmission and grid connectivity.

The central and the state government in India have put in some key initiatives to boost the wind energy power production in the country. The measures include introduction of State Feed-In Tariffs, Renewable Purchase Obligations (RPOs), issuance of Renewable Energy Certificates (RPCs) to an energy generator producing 1MWh of renewable energy, and the set up of National Clean Energy Fund (NCEF). The government also implemented a Generation Based Incentive (GBI) for grid connected wind power projects.

The Central Board of Direct Taxes withdrew the Accelerated Depreciation (AD) benefit in April 2012, which reduced the cash flow in the sector. There were also sudden reductions in tax incentives. Also, there is a lack of strategic integrated framework that supports a project right from its conceptualization stage to its completion and commissioning. The National Action Plan on Climate Change (NAPCC) 2008 and the Integrated Energy Policy (IEC), 2006 have their basic goals different in terms of coverage of wind energy in India in the next 15-20 years. While NAPCC predicts a 15% rise, IEC predicts only 5.2%. This huge gap needs mending and proper channelization on the part of Government of India to align the vision of development of wind power.

Investment in Wind Power in India

According to a press report by Bloomberg New Energy Finance [4], the annual investment in onshore wind energy projects will double in the next 20 years globally. A significant portion of this would be in the emerging markets, especially in India. According to market studies, investment in the wind sector grows by almost 51% every year.

In 2012-2013, the approximate investment in the wind energy sector in India was Rs. 10,200 crore for 1700 MW of commissioned projects compared to 2011-2012 figures of Rs. 19,000 crore for 3200 MW of commissioned projects. This depreciation has been largely due to the discontinuation of the AD scheme. With the new Narendra Modi Government at the center, the investors are hoping that the scheme would be re-initiated. A recent meeting between the Union Minister of Power, Mr. Piyush Goyal and the major organizations like IWTMA, WIPPA, InWEA, et al., does throw a positive signal that the new government is committed to the growth in this sector.

According to a report by BRIDGE TO INDIA and GTM Research, India has a bunch of conducive factors for the growth of solar energy. As of May 2014, India has an installed capacity of 2.5 GW of photovoltaics (PV), of which 70% is found in the Gujarat and Rajasthan. This has been largely driven by National Solar Mission (NSM) and Gujarat Solar Policy. India currently ranks sixth in global capacity additions for 2013. An estimated 700 MW of Power Purchase Agreements (PPAs) have been signed under state policies during the last year. In addition, another 700 MW of utility-scale solar projects has been signed under NSM. Rooftop solar market has shown steady growth in the past couple of years.

The Jawaharlal Nehru National Solar Mission (JNNSM) was launched in 2010 with an aggressive target of deploying 20,000 MW of grid connected solar power by 2022. MNRE has also initiated a major project on Solar Radiation Resource Assessment (SRRA), similar on the lines of C-WET. This is to assess and quantify the solar radiation availability in different parts of the country. The government also offers capital subsidies to semiconductor manufacturing plants in Special Economic Zone (SEZs) and outside SEZs through semiconductor policy launched in 2007. The subsidy is 70% in the North-East states and 30% in the remaining states.

A state specific policy was first implemented in Gujarat in 2009. Under this, the minimum capacity of solar PV and solar thermal project should be 5MW. Cross subsidy surcharges was not applicable for open access obtained for third party sale. Taking a cue from the Gujarat government, similar policies has been implemented by states like Rajasthan, Madhya Pradesh and Karnataka. Concentrated Solar Power (CSP) is being looked upon by the government as an ancilliary to the already existing markets for PV. Large-scale CSP projects are underway which would provide a projected 500 MW of energy under NSM. In the 2nd and 3rd phase of the of the implementation of JNNSM, an additional 3000 MW grid-connected solar power is envisaged till 2017. Also, the deployment of 20 million solar lightening systems for rural areas is proposed by 2022. [5] It remains to be seen what is the proposed budget plan of the new Government specifically for the solar energy projects.

Gujarat has been at the forefront of production of renewable energy in India. The state offers generous tax incentives, single window clearances, and good FITs to manufacturing companies, which enables the development of renewable energy sector in the state. In one of his pet projects, the then Chief Minister Mr. Narendra Modi envisaged setting up of largest solar park hub of Asia in Gujarat. This kind of initiative is expected to save around 8 million tonnes of CO2 and nine hundred thousand tonnes of natural gas per year. The cumulative capacity of this solar park is around 1000 MW. The government has also offered lower rates of PPAs for the state than the standard national rates. The solar farms are mainly of flat-panel PV type.

GE has invested $24 million in 151 MW solar photovoltaic power project owned by Welspun Energy. This has provided a major boost to the confidence of foreign investors in the state sponsored solar power projects. Plans to set up World's largest floating solar power plant by National Hydro Power Corporation (NHPC) are also in full swing. This power plant is estimated to have a capacity of 50 MW and is being built in Kerala with the association of Renewable Energy College.

In a report titled `Paving the Way for a Transformational Future: Lessons from JNNSM Phase I,' the World Bank said that investments to the tune of $13 billion are required in the next three years to fund phase two of the mission. Of this, nearly 70 per cent, or $9 billion, should come through debt financing. During the phase I of the project, the major financing came from export credit agencies, multilateral financial institutions and some non-banking financial companies, and not from commercial banks. Therefore, there is a big business opportunity for commercial banks to invest in solar power.

There is a massive opportunity for growth in India for renewable energy sector. The potential of wind and solar power has been assessed but the infrastructure to capitalise on that potential takes a severe beating mainly owing to the lackluster approach by the government of some states. Also nationally, there is a lack of an integrated plan of systematic development of sustainable energy. What would be interesting to watch out for in the coming five years is how the new government plans to tackle these issues to bring about a change in the fortunes of power-starved nation.