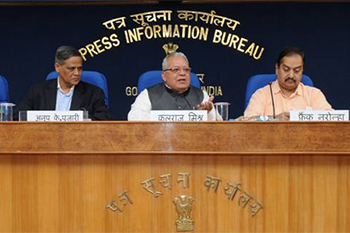 These initiatives include ease of registration of the business in the form of Udyog Aadhar Memorandum, Framework to revive sick MSMEs, promoting innovation in rural entrepreneurship through ASPIRE scheme, fund for regenerating traditional industries, financial support in the form of credit guarantee and credit linked capital subsidy.

During the year 2015, Ministry of MSME launched various initiatives to improve the ease of doing business and to make Micro, Small and Medium Enterprises more globally competitive. These initiatives include ease of registration of the business in the form of Udyog Aadhar Memorandum, Framework to revive sick MSMEs, promoting innovation in rural entrepreneurship through ASPIRE scheme, fund for regenerating traditional industries, financial support in the form of credit guarantee and credit linked capital subsidy. Some of the programmes launched during the year include

Udyog Aadhaar Memorandum (UAM)
The Ministry in September-2015 under the MSME Development Act, 2006 has notified that every MSME unit shall file Udyog Aadhaar Memorandum (UAM). This is a path breaking step to promote ease-of-doing-business for MSMEs in India as the UAM replaces the filing of Entrepreneurs’ Memorandum (EM part-I & II) with the respective States/UTs. While some of the States/UTs had made the process online, either by themselves or through the portal created by this Ministry, several States/ UTs were still relying on the manual way of filing EM. The cumbersome filing of EM has now been dispensed with and the entrepreneurs in the MSME sector just need to file online, a simple one-page UAM onhttp://udyogaadhaar.gov.in to instantly get a unique Udyog Aadhaar Number (UAN). The information sought is on self-certification basis and no supporting documents are required at the time of online filing of UAM.

The UAM has emerged from the vision of Honorable Prime Minister of India shared with the Nation through “Mann Ki Baat” telecast on 03-10-2014 and the recommendations for Universalization of Registration in the Report of the Kamath Committee on Financial Architecture of MSME sector. Wide-ranging consultation exercise has been done in the matter in the National Board of MSMEs and the Advisory Committee for MSME Act.   It is expected that this simplified one-page memorandum to be filed online shall unlock the potential of MSMEs, besides improving our international ranking in Doing Business Index. Within a short time of three months, more than 95,650 UAMs have been filed in the country.

Framework for Revival and Rehabilitation of MSMEs
The existing mechanism for addressing revival, rehabilitation and exit of small enterprises is very weak in the country. The most recent Doing Business (DB) Report ranks India 137 out of the 189 economies for resolving insolvencies. It notes that resolving insolvency takes 4.3 years on average and costs 9.0% of the debtor’s estate, with the most likely outcome being that the company will be sold as piecemeal sale.

Pending a detailed revision of the legal framework for resolving insolvency/bankruptcy, there was a felt need for special dispensation for revival and exit of MSMEs. The MSMEs facing insolvency/bankruptcy need to be provided legal opportunities to revive their units. This could be through a scheme for re-organization and rehabilitation, which balances the interests of the creditors and debtors.

a Framework for Revival and Rehabilitation of MSMEs has thus been notified in May-2015 under section 9 of the Micro, Small and Medium Enterprises Development Act, 2006.

The salient features of the same are as follows:
Prime Minister’s Employment Generation Programme (PMEGP)
A Scheme for Promotion of Innovation, Rural Industry and Entrepreneurship (ASPIRE)

Scheme of Fund for Regeneration of Traditional Industries (SFURTI)

Credit Guarantee Trust Fust for Micro and CGTMSE Scheme
CGTMSE was set up to strengthen credit delivery system and facilitate flow of credit to the MSE sector. The Credit Guarantee under CGTMSE seeks to reassure the lender that, in the event of a MSE unit, which availed collateral free credit facilities, fails to discharge its liabilities to the lender; the CGMSE would make good the loss incurred by the lender up to 85 per cent of the credit facility.

During the current financial year (April to October 2015), total number of proposals approved under the scheme was 2,31,774 involving a guarantee amount of Rs.11,446 crore.

Credit Linked Capital Subsidy Scheme (CLCSS) for Technology Upgradation
CLCSS aims at facilitating technology upgradation of Micro and Small Enterprises (MSEs) by providing 15% capital subsidy (limited to maximum Rs.15 lakhs) for purchase of Plant & Machinery. Maximum limit of eligible loan for calculation of subsidy under the scheme is Rs.100 lakhs. Presently, more than 1500 well established/improved technologies under 51 sub-sectors have been approved under the Scheme.

During the current financial year (April to October 2015), 1,195 units benefitted and total subsidy released to the tune of Rs. 75.57 crore.