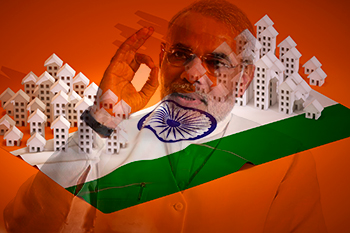 India’s fight against black money, corruption and terrorism just got very real. In what many consider to be a rather bold move, Prime Minister Narendra Modi on November 8th announced that the Rs 500 and Rs 1000 notes will no longer be legal tenders. Modi has said that these notes will be replaced with newly minted Rs 500 and Rs 2000 notes. This move has far reaching implications for many sectors including real estate which has been going through a somewhat uninspiring phase in the recent times.

It is expected that the segments of the property market which have a high proportion of cash transactions will be hit hard- viz the secondary property market, luxury home sales and land transactions. The range of cash component used in these segments is anywhere between 15-40%. One can expect to see a price correction triggered by stagnation of sales as the stock of unaccounted money which lubricates these markets has been sucked out.

Even though many are predicting negative market sentiments for the realty sector there is a silver lining for buyers who are financing their property purchase via means of accounted money and home loans. Here are top 5 reasons why a salaried property seekers should invest in a property today:

1) It is a buyers’ market for the next three to four months: Till the market stabilises many builders would be in need of cash flow and buyers would definitely have an upper hand in negotiating the best deals in the primary property market.

2) Higher costs due to RERA: With implementation of RERA (Real Estate Regulatory Act) the property prices are likely to see an upward trend. The RERA requires developers to be transparent about source and use of funds for a project, and the higher cost of complying with the regulation is unlikely to be absorbed by the builder. So the next few months buying window for buyers in ideal.

3) Impact of GST: Post implementation of the Goods and Services Tax (GST) most of the input items into real estate like cement would fall in the 18% bracket, which is much lower than the current 30-40% tax. So the overall construction cost for a developer is likely to fall. But, looking at the current scenario with decrease in profit margins for developers due to RERA and expected construction delays due to demonetisation many developers might not pass on this benefit to buyers.

4) Buyers would be spoilt for choice in the secondary market: Until last week, most sellers of resale properties had an incentive to seek out buyers who were willing to transact in unaccounted money. So much so that there was a preference for such buyers, effectively eliminating most resale properties from the reach of salaried buyers who finance their purchase via their savings and home loans. Given the demonetisation, the incentive to go sell through cash dominant transactions is less which opens up a whole new supply of bargain deals in the resale market. In addition to the wider choice, it gives an upper hand to property buyers to crack the best deal.

5) Interest rates are set to go down further: Demonetisation brings with it a deflationary effect on the economy, and you can expect interest rates to go down further in the short run. The banks will have more liquidity at their disposal due to higher deposits into the banking channel. Both are likely to trigger a push into home loan lending via cheaper loans and better credit terms.

The author Ganesh Vasudevan is the CEO of Indiaproperty.com