Bhavarlal H Jain is said to have three pictures in his office in Jalgaon: Mahatma Gandhi, Jawaharlal Nehru and JRD Tata. He is also a big fan of Mother Teresa and has recently added Steve Jobs to his photo gallery. Inspired by their dedicated vision of doing things that would benefit not just an individual but the society and for which personal aspirations are inevitably surrendered, the title of Jain’s book The Enlightened Entrepreneur stands on a high moral ground. And yet, the book does not preach. It inspires.

The son of a small farmer in rural Maharashtra, Jain chucked a cushioned job as a deputy collector when he was just 23 to be an agricultural entrepreneur. Just about two decades into India’s freedom, in the early sixties, agriculture was not a career where one could accrue easy and quick money neither was it a safe bet, with small farmers as the clients. Jain could have at least followed the chosen path of his community in areas where they have a stronghold like becoming a cloth merchant or grain merchant.  But, after a chat with his mother, Jain followed her thoughts and ventured into agriculture and into micro-irrigation at a time when farmers in India were oblivious of its efficacy especially in the coming years of water scarcity. Micro-Irrigation implies sustainability, a core value in his corporate parlance and takes care of not just the human community but also the birds and animals as his mother had wanted. Being an entrepreneur, he made his share of mistakes. However his courage and belief are so powerful that it helped him tide over the crisis which his company went through. 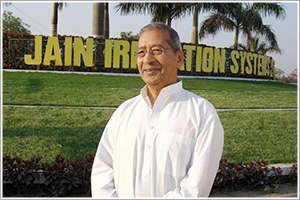 Of course, when he writes about it, he does not just speak about his indomitable spirit and foresight. What shines more is his fond belief in shared values with his ‘associates’- a more used synonym in corporate parlance is ‘employees’. That for a $1 billion company of over four decades, there has been no union and not a single employee retrenched or left during its toughest period spanning over five years reads like a new age version of a fairy tale story. But in effect, these are capsules culled, sort of walking the talk, by Bhavarlal H Jain, the founder and chairman of Jain Irrigation Systems Ltd in ‘The Enlightened Entrepreneur’. It is a compilation of various lectures given by him at colleges, universities, summits and conferences.

In a sleek volume and neat presentation brought by Rupa Publications, the cover design almost makes you introspective and thus sets the stage for further self-probing. The experiences narrated do not sound as a spiel; the words so used are lucid and engaging. Quoting from a gallery of real-life personalities right from his seven-year-old grand son to his associates to top officers, Jain brought forth the pearls of wisdom hidden in his conversations with each of them. Yes, because, they are real people, the education so imparted is also real. So, ‘how to count’ becomes as important as ‘what counts’. It makes the reader feel like wading through a river of wisdom in gay abandon. 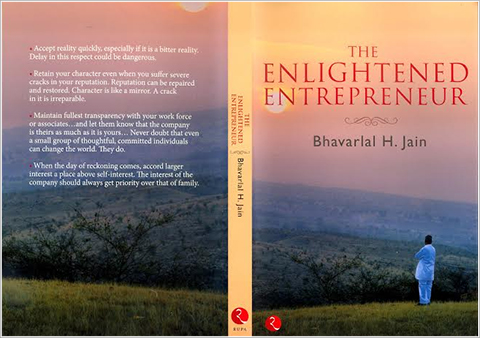 The title of the book is apt and it is reassuring that in these days of super competitive zones, companies can perform brilliantly on the basis of trust and transparency. Jain put forth the concept of customer relations even before it is officially coined. That resources and returns must be shared with the community and wealth disproportionate to one’s effort bring little happiness are enumerated with examples. Yes, it makes a lot of difference that it comes from the founder of a company which was presented with ‘The Good Company Award’ by Forbes in 2012. And yet, the book will not just interest corporates. It is for anyone to understand the difference between success and triumph. When you rule with logic and strategy, you will succeed. But when you prevail with feelings and empathy, you will triumph, is an example of Jainspeak.