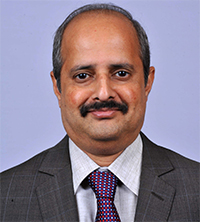 “This year’s budget announcements are reflective of the Government’s intent to move towards achieving better economic growth and restoring confidence in India Inc.”

K.G. Krishnamoorthy Rao, Managing Director and Chief Executive Officer, Future Generali India Insurance Company Limited, a joint venture between Future Group, game changers in Retail Trade in India, and Generali, a 184 years old global insurance group featuring among the world’s 50 largest companies. Rao has experience spanning 29 years in Insurance and Risk Management. Prior to joining Future Generali, Rao was associated with Bajaj Allianz General Insurance Company Limited, where he was heading the underwriting functions across all lines and was instrumental in setting up the Underwriting and Operations team for the company contributing significantly towards the underwriting profit of the company.

Future Generali India Insurance provides a comprehensive solution to customers and enterprises through retail, commercial, personal and rural product offerings. The company reaches out to customers through more than 5,000 advisors and FG Direct channels across the country and insures over 2,200 corporates.

In a conversation with Sarika Kodag of IIFL, K.G. Krishnamoorthy Rao says, “This year’s budget announcements are reflective of the Government’s intent to move towards achieving better economic growth and restoring confidence in India Inc.”

What is your call on the Indian economy?
This year’s budget announcements are reflective of the Government’s intent to move towards achieving better economic growth and restoring confidence in India Inc. The budget involves the correct criteria to enhance growth. Today, growth in the agriculture sector is necessary because it will improve the economy. The government has provided the required boost to the agricultural sector in this budget, which is likely to have a positive effect on the economy on the whole.

New projects or expansion of existing plans will increase Engineering insurance premium. Thus, everything will hinge on how well the economy picks up.

Talking about the government’s policy stance on the sector, the last amendment of the insurance sector introduced various beneficial changes such as FDI hike from 26% to 49%. Nonetheless, there are some long-pending demands which have been directed to the regulator and thus may affect the industry positively. So, we, as an insurer, expect the regulator to factor in industry requirements and come up with suitable regulations in a time-bound manner.

Given the rise in the FDI limit from 26% to 49%, is the Generali group likely to increase its stake in the company?
The shareholders have initiated discussions and expect something to fructify in the course of next six months or so.

Brief us about company financials?
In 2015-16, the company has garnered nearly Rs. 1480 crore in terms of premium. For 2016-17, the company expects overall premium of close to Rs. 1600 crore. However, the profit could be lesser this year because of crop insurance losses and natural calamities such as “hudhud” in Visakhapatnam and Tamil Nadu floods. Hence, profits did take a hit this year.

Even after the entry of private players, the public sector general insurers are still dominating the sector. Do you agree?
No! The proportion of market share of both, public sector and private sector insurance companies is about 50-50. The public sector insurance companies have had a long-standing presence in the Indian insurance market. That said, it’s just a matter of time! Private sector insurers will make their presence felt and get on an even keel with their public counterparts. Due to privatization in the sector, the insurance industry grew up to 8-10 times, which is a positive sign. It would be pertinent to note that the overall insurance market has developed so much.

What are Future Generali India’s growth plans for this financial year? How do you plan to grow your agency base?
The company’s growth plans are based on the state of economy. Last year and even this year, the industry is growing at around 10-11%. Our growth rate is better than the industry.

The company has employed around 5000 agents and is in the pursuit to recruit another 800 agents. In order to maintain our growth rate and deepen penetration, the company is recruiting more agents to widen the agency base. Last year, we opened around 10 offices and we have around 135 offices in total.

The company has a ‘bancassurance vertical’ as well and have tie-ups with small banks and co-operative banks. We are also looking at more such tie-ups to increase customer base. Now, the regulator has allowed banks to tie up with more than one insurer, which increases the potential of the bancassurance vertical as a whole.

Lastly, we are trying to tie up with more broking firms, especially retail brokers.

How do you plan to go about achieving your goals by using different distribution channels? How is the company adapting to digitalization?
From last year onward, the company has started online operations and this channel will continue to expand. Nonetheless, online business will take some time to assume more significance.

We will have some exclusive products for the online segment and are filing documents to IRDAI for such products. Our online products will not be available offline.

Along with the increasing agency base and online presence, what are your other plans to meet company expectations?
The rural market has a lot of potential to grow and hence, the company is tying up with micro-finance institutions and NGOs working in rural areas to come up with products that suit the rural market. These could include crop insurance, micro insurance, coverage for personal accident, house, tractors and other farming equipment. The Government and the regulator also want to develop customer service centres. Most states are now equipped with service centres to address various issues/queries pertaining to insurance.

Does that mean the company is open to join crop insurance?
Yes, we are actively dealing in crop insurance since the past two years. We would look at how the new scheme announced by PM is developing this year.

Are there any products in the pipeline?
In October 2015, the company has unveiled ‘Health Total’ which is one of the best available products in the market now. Its insured sum ranges from 3 lakh to a crore. Under this insurance, you can cover your extended family members as well.