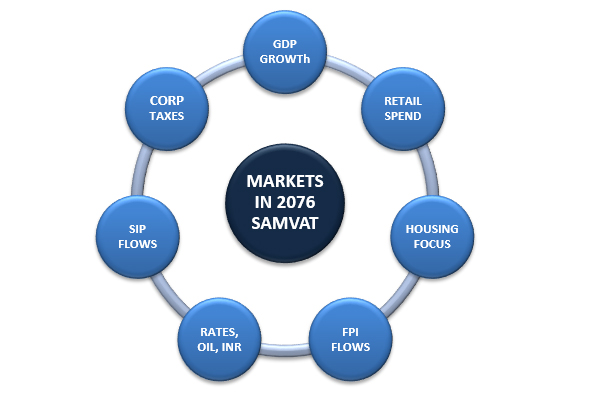 Factors that will affect stock market returns in Samvat 2076

As we look ahead at Samvat 2076, let us understand what could be the big drivers that will impact the stock markets.

Samvat 2076 may have begun on a solid note but such euphoria can change in a short span of time. We saw how things changed rapidly for the markets post the IL&FS implosion in mid-2018. As we look ahead at Samvat 2076, what could be the big drivers that will impact the stock markets? Here are seven factors that could leave a deep imprint on the stock markets.

How the corporate tax cut adoption plays out?

The big news in Samvat 2075 was the aggressive tax cuts offered to corporates. The FM cut corporate tax rates from 30% to 22% which resulted in an effective saving of 9.77% if you add the surcharge and cess. The government claims that the benefit to corporates will be worth $20 billion and that is a lot in valuation terms. But that can only happen if the shift is rapid and substantial. In the September quarter we have already seen the trend of companies shifting to the new tax system and the December quarter may be really suggestive. That will be the big driver for markets.

Will the GDP growth bounce back from lower levels?

For an economy like India that thrives on the growth edge, it is essential to sustain high rates of GDP growth. GDP for the June quarter was as low as 5% and if the IIP and core sector numbers are any indication, there will be pressure in September too. That is largely factored in. The bigger question is whether the GDP can revive in the second half because GDP will have to grow at close to 7% in the last two quarters if the RBI's goal of 6% GDP growth has to be achieved. That will, in a way, determine the course of the markets.

Will the FM put more money into retail pockets?

Tax breaks and exemptions have been few and far between. That may still not be an answer to consumption slowdown. If stock markets have to perform well then there has to be a big push to consumption; either direct or indirect. This could include cuts in personal tax rates, lower rates of GST on most products of mass consumption, lower cost of funding etc. Unless these 3 critical issues are simultaneously addressed, stock markets could face pressure at higher levels if there is no consumption support.

If you are worried about growth; focus on housing

Many of the measures taken by the government for giving a boost to housing have not had the desired results. Back in 2002, a combination of low interest rates and rising income levels led to a massive expansion in homebuyers. That triggered a huge consumption boom which lasted for the better part of the next 5 years. Housing has a major multiplier impact on the economy because it is a boost for income levels, savings, investments, cement demand, infrastructure demand and a host of ancillary services. In fact, the big thrust for the stock markets could predicate on a boost to housing sector.

Will the foreign portfolio flows into India continue?

Domestic institutions like mutual funds and insurance companies have become big players in the stock markets. However, it is still the foreign portfolio investors (FPIs) that hold the key to market movements. That is due to their dual impact on the stock markets and on currency values. Sustained FPI flows will largely depend on India sustaining the reforms process, maintaining its growth focus and keeping fiscal deficit under control. Of these 3 requirements, only the last one looks eminently difficult. Hence, the management of the fiscal deficit and the ability to restrain below 3.5% will be the key to markets.

Handling the troika of rates, oil and currency

These are 3 parameters that have always had a big impact on the market direction in India. Ideally, markets prefer stable to low rates in the economy. Any rate hike can have a hugely negative impact on the markets as it impacts valuation discounts and also adds to the cost of funds and the solvency risk. Oil, needless to say, matters as India still relies on imports for 85% of its daily needs. Subdued oil prices around $60 have served India well in the past. Finally, currency stability is the key. Stock markets are prepared for calibrated weakening of the rupee; not for sudden shocks.

This may appear to be a small point but it could actually prove to be the difference in the coming year. In the last one year, despite all the market uncertainty, retail investors sustained SIPs of over Rs8,200cr per month. That is the stable money that sustains the market and gives it the much needed support in tough times. But retail investors tend to behave in herds and the key to Samvat 2076 could actually lie in these SIPs sustaining. That is one thing that the government really cannot regulate or influence!