How does the Fed rate impact Indian investors and markets?

Markets tend to interpret a rate cut as an admission of an economic slowdown. That possibly explains why the Fed was a lot more cautious about the quantum of rate cut.

When the US Federal Reserve announced late on Wednesday that Fed rates would be cut by 25 basis points, there was a sense of disappointment. Global markets were expecting the Fed to take an aggressive stance and cut the rates by 50bps to give a clear signal that the US was committed to be the engine of global growth. Also, the CME Fedwatch Tool, which captures the probability of rate cut, had assigned a 50% probability to a 50bps rate cut. First, let us look at the logic of the rate cut as calibrated in the FOMC (Federal Open Market Committee) statement.

What the FOMC actually said
The statement put out by the FOMC late on July 31st clearly underlines that this 25bps rate cut should not be construed as the beginning of a trend. While the Fed rate was cut from the range of 2.25-2.50% to 2.00-2.25%, the FOMC statement has clarified that future rate action will be determined by data flows. The rate cut was driven by the need to give a boost to growth and lower the cost of funds in the US as an antidote to the higher tariffs on imports. Inflation has remained around the 2% mark and that has given the confidence to the Fed to cut rates. In addition, the Fed has also committed to conclude its security reduction program two months earlier; in what could be a clear indication that it wants to keep liquidity comfortable.

How will this move by the Fed impact Indian markets?
Let us look at the bond markets first. 10-year bond yields in India and the US have been on a downtrend over the last one year. Indian bonds yields had touched a high of 8.3% before giving up nearly 200bps from that point. Similarly US yields had gotten closer to 3% last year before falling below 2% in July 2019 on dovish expectations. But what is more interesting is that the days of Indian bond yields decoupling from US yields is long gone. If you look at the bond yields over the last five years, Indian bonds yields and the US bond yields have almost followed a similar direction. 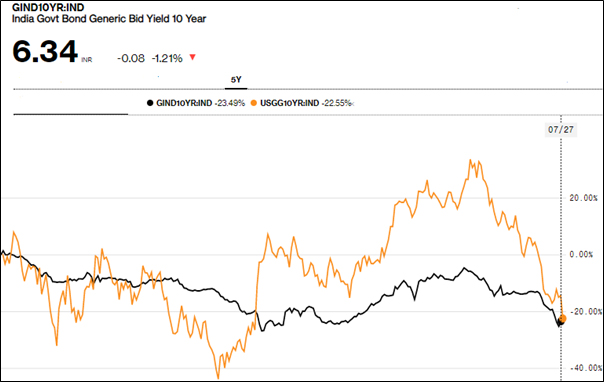 While the US bond yields have been a lot more volatile than the Indian bond yields, as depicted in the above chart, the broad direction of the yields over the last five years has been absolutely synchronized. Indian monetary policy has come a long way since the diffidence of 2008 when the RBI was not too sure whether aggressive rate cuts would help India’s case. Monetary divergence is no longer an option for India as it directly impacts the flow of FPI capital into Indian markets. If the last five years is any indication, then Indian bond yields are also likely to be headed lower. While the RBI stance is yet to be seen in the August policy, the broad market expectation is of a 25bps rate cut (if not an aggressive 50bps rate cut).

What does the rate cut mean for Indian equity markets?

There is a counter side to the rate cut argument. Markets tend to interpret a rate cut as an admission of an economic slowdown. That possibly explains why the Fed was a lot more cautious about the quantum of rate cut. A 50bps rate cut may have been seen as a sign of desperation on part of the Fed to boost growth. From that perspective, a 25bps rate cut was well thought through. 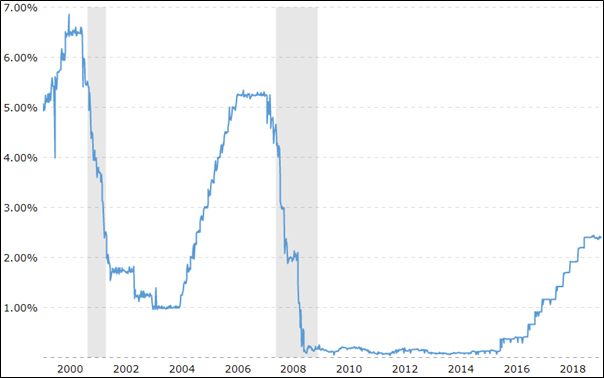 In the last 20 years there have been 3 occasions when the Fed had undertaken a series of rate hikes starting in 1998, 2004 and then in 2015. Each of these series of rate hikes were followed by rate cuts that were much larger in size and intensity. The first round of rate hike was reversed post 9/11 in 2001, while the second round of rate hikes was reversed post the Lehman collapse in 2008. Extrapolating that trend to 2019 would be hard but interesting, nevertheless. Whether the rate cut on July 31st was one-off or the beginning of a reversal is still not clear. Remember, Indian markets have offered great bargains in the past when US Fed rates have reversed. It may still be too early to conclude that!