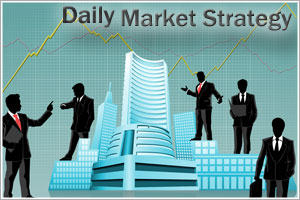 The outlook is a subdued start. The global indices are on a lull. Eurozone finance ministers could not really solve their differences with Greece.

It is a capital mistake to theorize before one has data. Insensibly one begins to twist facts to suit theories, instead of theories to suit facts. -  Sir Arthur Conan Doyle

The market managed to hold on to gains for the last two days minimizing any sentiment damage following the BJP drubbing in New Delhi elections. For now the Aam Aadmi Party says it will not contest assembly elections in other states. With political events as good as over as the market is concerned, the focus will now shift to the Union budget.

For the day a lot of attention could be on macro data. The government has changed the base year for calculating CPI to 2012 from 2010 and the first monthly estimate of retail inflation using the new series will be out today. GDP numbers were revised recently. The rebasing has caused some amount of confusion and bewilderment among economists. There are significant interpretational issues for the new series too. No immediate impact of higher growth estimates are expected on either the fiscal or monetary policy. Industrial production (IIP) data for December 2014 will also be released today.

The outlook is a subdued start. The global indices are on a lull. Eurozone finance ministers could not really solve their differences with Greece. The ministers will now meet on Monday. Greece wants to overhaul 30% of its bailout obligations while EU ministers want Greece to abide by existing terms. Greece's government says conditions of the €240bn bailout have impoverished Greece.

The much-feared general anti avoidance rules (GAAR) could be deferred by about two years so that business sentiment is allowed to improve in India but will need to be rolled out in some form or the other by 2017, in sync with the international framework on preventing treaty abuse that's been accepted by the G20, says a report.

In a relief for Jindal Steel and Power Ltd (JSPL) and its promoter Naveen Jindal, Delhi High Court directed a technical committee to review its own decision to change the end-use of two coal blocks earlier allotted to the company and removing the mines from the auction.

The Board of Directors of Grasim Industries Limited approved the proposed merger of Aditya Birla Chemicals (India) Limited (“ABCIL”), an Aditya Birla Group Company with Grasim. The swap ratio approved by the Board is 1 (one) share of Rs. 10 each of Grasim for every 16 (sixteen) shares of Rs. 10 each of ABCIL. Grasim will issue 14.62 Lakh new shares, which will increase its share capital to Rs. 93.31 crore.

Shares of Wockhardt surged after the company reported 14% increase in consolidated net profit at Rs 347 crore for the third quarter ended December 31, 2014 (Q3).

Shares of NCC Ltd hit 20% upper circuit at Rs76 after reporting rise in its consolidated net profit at Rs 25.57 crore for the third quarter ended December 31, 2014.

Ricoh India has smartly moved higher to hit 20% upper circuit in the early noon deals after investors quickly picked-up shares of the company on the back of strong Q3 numbers.

Fortis Healthcare scaled 20% to end at 52-week high of Rs 138.90. During the trading session, the stock had touched a low of Rs 117. Rakesh Jhunjhunwala bought 34,85,075 shares of Fortis Healthcare through bulk deal on the BSE.

Trends in FII flows: The FIIs were net sellers of Rs3.71bn in the cash segment on Wednesday. The domestic institutional investors (DIIs) were the net buyers of Rs1.47bn, as per the provisional figures released by the NSE.

Natco Pharma, which was granted compulsory license for Bayer's cancer drug Nexavar (Sorafenib) by the Indian patent office a couple of year back , announced that its marketing partner Mylan Inc. has filed an Abbreviated New Drug Application (ANDA) for the generic version of the same US FDA. (BS)

Irish lessor Babcock and Brown Aircraft Management (BBAM) has sought the return of 6 Boeing B737 aircraft, and payments to the tune of around USD100mn from Spicejet towards several months of unpaid lease rentals (USD40mn), besides other damages like maintenance costs. (BS)

India Cements announced that its shareholders are set to get ownership of Chennai Super Kings Cricket Ltd, a new wholly owned subsidiary of India Cements. (BS)

Tech Mahindra said its sister company Mahindra Finance will become equal shareholder if the Reserve Bank clears its payment bank licence, and the company is also in talks with the World Bank Group member IFC for a partnership in the foray. (ET)

In a relief for Jindal Steel and Power Ltd (JSPL) and its promoter Naveen Jindal, Delhi High Court directed a technical committee to review its own decision to change the end-use of two coal blocks earlier allotted to the company and removing the mines from the auction. (BS)

The board of Grasim Industries approved the proposed merger of Aditya Birla Chemicals (India) with itself and has approved the swap ratio at 1 share of Grasim for every 16 shares of ABCIL. (BL)

IT services major Infosys said it has been selected by ICA Gruppen, Sweden's leading retailer, to manage its IT operations. (BL)

Surana Solar Ltd has firmed up plans to enter into a new line of business for the manufacturing of LED bulbs and LED tubes of an initial capacity of 1mn units. (BL)

Uttarakhand Cabinet has decided to regularise land under the category IV, provide a subsidy of Rs232m to clear the dues of private sugar mills and bring a Bill in the Assembly for providing 10% horizontal reservation to the statehood activists. (BS)

National Bank for Agriculture and Rural Development (NABARD) announced Rs 1.1tn credit plan for agriculture in Rajasthan for fiscal 2015-16, encompassing all 33 districts in the state. (ET)

Click below for the India Infoline Daily Market Strategy:
https://content.indiainfoline.com/Newsletter/120215.html

RBI hawkishness works as CPI Inflation tapers to 6.71% for July